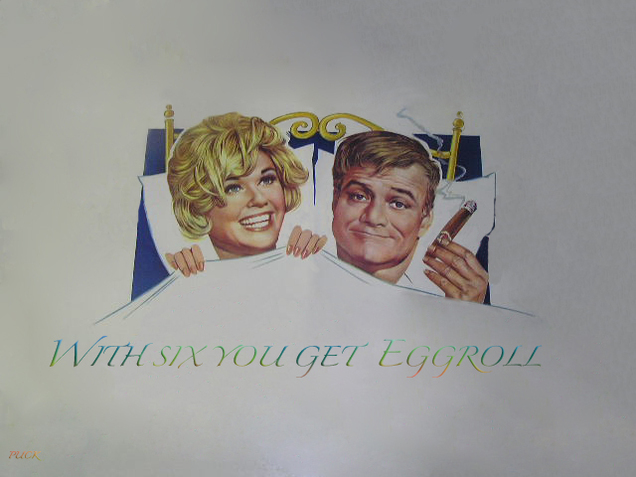 "Day and Keith make a terrific team, beautifully playing off each other; her pep gives his laconic delivery some zing, and he calms her down through some nicely calibrated understatement... It makes her subsequent retirement from feature films all the more frustrating because this movie clearly demonstrates that with good material, she could still rise to the occasion - and then some." - Tom Santopietro from Considering Doris Day

"...I don't know about the other three, but I kept wondering how the characters played by Miss Day lose their husbands. Cancer? Suicide? Auto accident? There's never any hint." - Vincent Canby, New York Times October 10, 1968
﻿
"Wonder of wonders, Doris Day is out of her rut. Long after most of us had consigned her to the dodo-bird status, she bounces back (as is her wont) in a genuinely funny film for the whole family entitled, 'With Six You get Eggroll'......wit of the Jean Kerr type flourishes in the script and I wouldn't think of giving away a bit of it. Go laugh for yourself." - The Washington Post (Leo Sullivan) noted on August 8, 1968﻿

﻿"...screened as a sneak preview in a large suburban theatre, the capacity house (1200)  greeted Miss Day's name on the screen with heavy applause and audibly enjoyed the film throughout. Boxoffice results should be highly favorable." - Variety﻿

﻿"Doris Day's best in a long time! How great it is to sit in a theater and join in the waves of laughter at 'With Six You Get Eggroll'. Much, much better than 'Yours, Mine and Ours'. It's a good one, this comedy of mature love, and isn't it a relief to be able to use mature as meaning grown up rather than dirty. The whole family will love 'Eggroll'". - The Boston Herald Traveler August 8, 1968﻿ 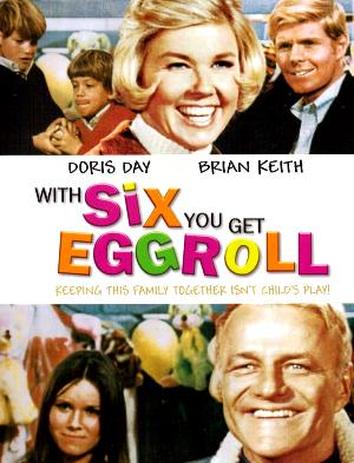 Doris plays Abby McClure, a widow with three sons, and Brian Keith plays Jake Iverson, a widower with a teen-age daughter. They start dating and decide to get married, but they are not prepared for the hostile reactions from their children. Instead of her last film, this should have been the beginning of a whole new career for Doris.

Widower Jake Iverson (Brian Keith) is invited to a dinner party given by widow Abby  McClure (Doris). Tiring of the matchmaking of Maxine and Harry Scott (Pat Carroll and Herbert Voland), Abby's sister and husband, Iverson leaves the party, but later encounters his hostess in an all-night store. Embarrassed by the widow's apology for her relatives' behavior, Iverson  arranges to see Abby again.

Although the widow and widower eventually fall in love and  marry, Abby's sons, Flip, Mitch, and Jason, fight continuously with Iverson's  possessive daughter Stacey. Even the family dogs are incompatible. For privacy the newlyweds borrow a camper, which they use as a bedroom.

After a bedtime  argument Abby drives off in the vehicle. Her husband falls from the camper, clad only in briefs and clutching a teddy bear. Abby, discovering her loss, speeds  toward the site of Iverson's disappearance, escorted by a band of hippies. When the camper collides with a chicken truck, Abby and entourage are arrested.

Hearing of the accident, Iverson and the children rush to her rescue, en route colliding with the same chicken truck. The irate driver menaces Iverson, and the  children and pets unite in his defense. At the station house parents and  children are joyfully reconciled.

One of our favorite film reviewers is Paul Brogan, who helms one of the forums on our website.  Below is his take on what amounted to Doris Day's last movie:

"With Six You get Eggroll" bowed in the nation's theatres in August of 1968. It  quickly became a popular success at the box-office thanks, in large part, to the  enduring popularity of the film's star, Doris Day. Although some critics compared it, unfairly, to another comedy success, "Yours Mine, and Ours", "Eggroll" can more than stand on its own merits.

The story about a widow with three children who falls in love with a widower  with one daughter, is not new or original. However, thanks to a charming script,  smooth direction by Howard Morris and the cast headed by Day and Brian Keith,  who have a great onscreen chemistry, it's a delight. By the film's  conclusion,  audiences have shed a few tears and had more than a few laughs.

Doris Day plays the 40ish widow with charm, sex appeal, and a great deal of warmth. She is completely convincing and it's in her small touches that she especially proves her mettle as one of the most natural screen actresses ever.  Keith is manly and real, and the supporting cast which includes Pat Carroll,  Alice Ghostley, George Carlin, Barbara Hershey, Jamie Farr, and the popular  rock  group, The Grass Roots, lend credible support.

While the film, the first production of the CBS film wing, may betray its television roots, seeming at times like a pilot for a sitcom, it is ultimately a  fine working of a winning formula. This was Day's cinema swan song, after two decades of enormous popularity,  and it's a film that none of the participants need feel anything but pride in. "


Jason McClure: Can I sleep with you, Mommy?
Abby McClure: Go! Get moving!
Jake Iverson: There's nothing wrong with that. I was just going to ask you the same thing.


Molly the Maid: [in front of Jake, Abby's date for the evening] Mrs. McClure! Now I need to put the meat on broil but your hair is on bake. Which should I do first?
Abby McClure: [humiliated] I think the hair, Molly.
Molly the Maid: False hair, false eyelashes, false bosoms. In my day women were flesh and blood, now they're 70% nylon and 30% foam rubber.


Abby McClure: [During a raucous party] If this wasn't my house I'd go home!


Abby McClure: Pretty, huh. Why shouldn't he date a young chick? Why take the bus when you can fly?


Maxine: The only thing I've never gotten is why parents never run away.

"Feelings" - Performed by The Grassroots

"The final scenes of this film feature Doris Day teary-eyed, wearing a housecoat and slippers. When her husband of 17 years Martin Melcher died suddenly just after production was completed, gossip magazines at the time used stills of Day from this movie, looking distraught and out-of-sorts, to accompany their articles about Melcher's death."

"Joe Besser was originally cast as the chicken delivery driver, and filmed his scenes, but director Morris recast the role with Vic Tayback. This was George Carlin's first feature film."

"This was Doris Day's final big screen appearance, following a 20 year career in the movies."

Mystery Science Theater 3000: Godzilla vs. the Sea Monster (1991) (TV Episode)
Joel: "It's often-circulated rumor that Brian Keith in 'Six You Get Eggroll' said, 'I've got a mad posh for health,' but he never did."

A Whole New Ballgame: With Brett You Get Eggroll (1995) (TV Episode)
title reference

Son of the Beach: With Sex You Get Eggroll (2000) (TV Episode)
title reference

The Garfield Show: With Four You Get Pizza (2011) (TV Episode)
Tittle Reference

Fired Up: With Sex, You Get Eggroll (TV Episode)
title reference