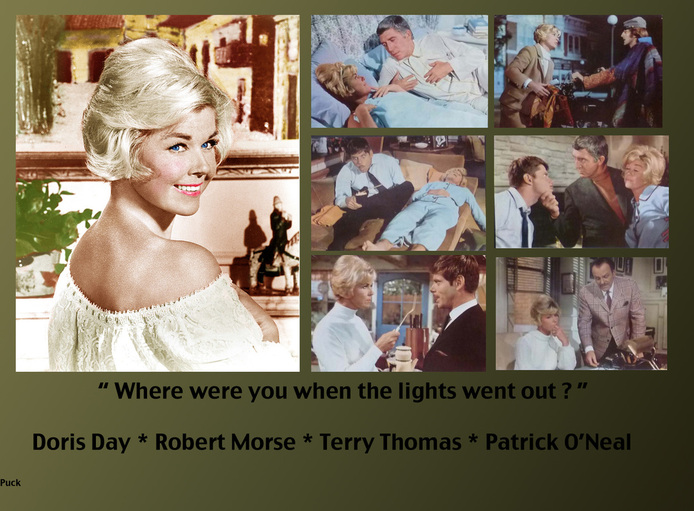 "An okay Doris Day comedy, well cast with Robert Morse and Terry-Thomas. On November 9, 1965, large parts of the eastern US were blacked out. Almost six months later, this film was announced. Some 15 months later, it rolled. And over 30 months after the event, it was released. How’s that for reacting to events?" - Variety

"Here is another movie about how Doris Day preserves her virtue. Frankly, I have lost interest in Doris Day's virtue. Doris Day without doubt has the most threatened virtue in history. Compared to her, Helen of Troy was a registered nurse... If I were Doris Day, and I had accidentally gotten in an embarrassing situation with Rock Hudson and Rod Taylor and Richard Harris and Robert Morse and everyone else in the phone book in 27 straight movies, and my virtue were still intact, frankly I'd start to worry." - Roger Ebert, July 3, 1968

"DORIS DAY'S honor, from movie to movie, was becoming a kind of drag as she tumbled from euphemism to innuendo. The beginning of each movie asked the question whether Anything was going to Happen, the middle raised the desperate possibility that Something Had Happened, and then, just in time for the lapsed-consciousness-in-the-motel kind of family comedy, she was married. The formula has become a piece of folklore now, like Hiawatha or Evangeline; it seems to reflect a national worry or conviction that wholesomeness is a matter of being had in your sleep." - Renata Adler, New York Times August 9, 1968 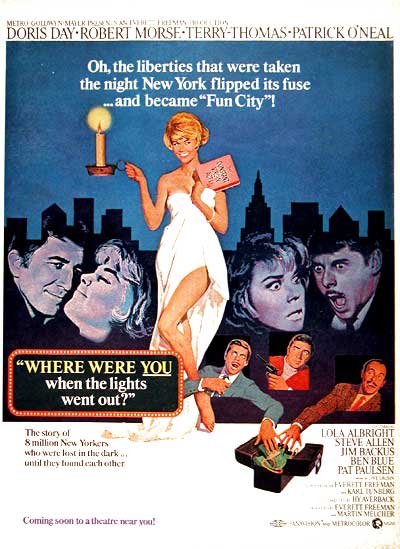 Theme Song Sung by The Letterman

When the Great Northeast Blackout of 1965 hit, millions of people were left in the dark, including Waldo Zane played by Robert Morse, a New York executive in the process of stealing a fortune from his company, and two people whose paths he's destined to cross, Broadway actress Maggie Garrison and her husband, Peter, played by Doris and Patrick O’Neal.

From Wikipedia:
"November 9, 1965: Maggie Garrison (Doris Day) is a stage actress who has spent her career starring in virginal roles, although she would relish the opportunity to play someone less savory, such as an Italian prostitute, at least once before she retires. When a blackout shutters her current Broadway play for the night, she returns home unexpectedly and discovers her architect husband Peter (Patrick O'Neal) being overly attentive to attractive reporter Roberta Lane (Lola Albright). Infuriated, she heads to the couple's weekend house in Connecticut and takes a concoction to fall asleep.

When corporate embezzler Waldo Zane (Robert Morse), fleeing New York with an attache case full of money, develops car trouble near Maggie's weekend house, he lets himself in and unwittingly takes some of the elixir himself, falling into a deep sleep beside her.

Peter shows up, sees the two together and assumes his wife has been unfaithful. Despite their claims of innocence and ignorance, Peter believes neither of them and heads back to Manhattan.

Maggie's agent Ladislaus Walichek (Terry-Thomas), anxious because she has announced her plan to retire, keeps her husband's jealousy burning in the hope their marriage will crumble and she'll be forced to continue working to support herself.

Maggie and Peter eventually reconcile, but new questions about what really happened when the lights went out arise when she gives birth exactly nine months after that fateful night."

Peter Garrison: Ten percent of Maggie is worth 100 percent of most women. Besides I knew her before she was a virgin.

Maggie Garrison: Don't just stand there! She wants your hard boiled egg and her pickle!

"Doris Day's character in this film, an actress constantly being typecast as a virginal heroine, was meant to be a parody of Day's own squeaky-clean screen image."

"Loosely based on the actual New York City blackout of November 1965."

"When Margaret is sitting on the couch during her interview, the yellow cushions beside her keep on moving."

"Morgan Freeman is seen briefly as a Grand Central Terminal commuter but does not receive on-screen credit."

"The film was the fourteenth starring Doris Day to premiere at Radio City Music Hall in Manhattan."


﻿From Variety and Box-Office Magazine:

"In the first week at Radio City Music Hall 137,932 tickets were sold resulting in a box-office gross of $278,269.00 which was the 'Greatest one week gross for any picture, in any one theater, anywhere, any time in history'. In it's second week, it took in $265,000 which was also a record second week at the Music Hall."﻿