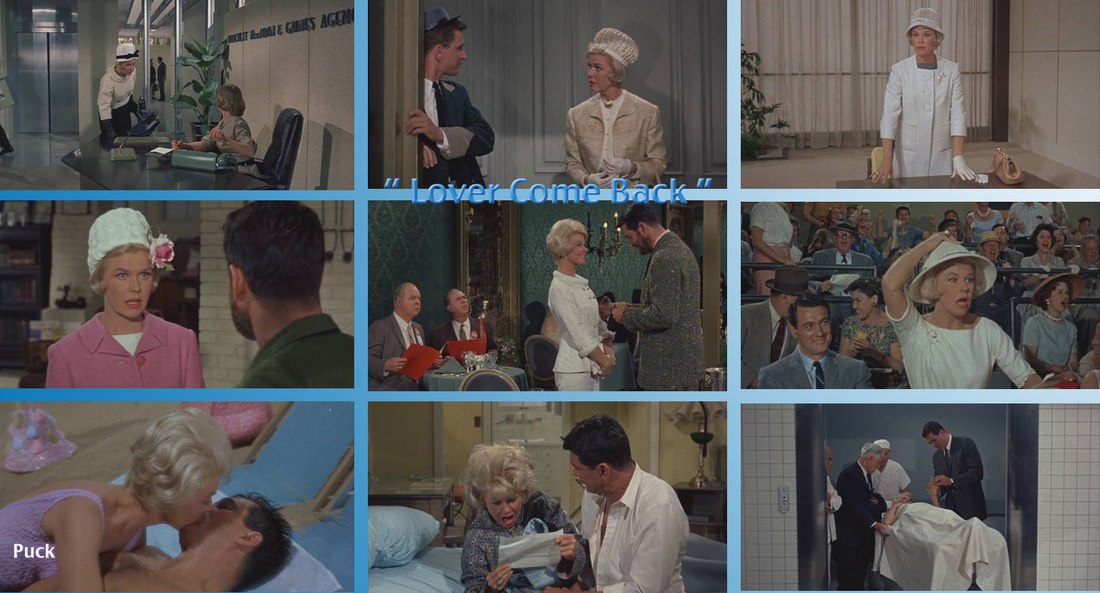 "Those were both playable roles. The advertising man in Lover Come Back, like the composer in Pillow Talk, was a ne'er-do-well. And playing a ne'er-do-well is terrific. I mean, you automatically like a ne'er-do-well, don't you? I guess it's because it's what we all wish we were, but don't have the guts to be. The advertising executive who played around all the time, and who was bored with it until he met Miss Day and said to himself, 'That would be rather interesting to toss in the hay. But I think I'll see if I can get her to go on the make for me" - now that's fun. And it's very playable." - Rock Hudson from Rock Hudson: His Story

"Sometimes we went ten or twelve takes because Rock and Doris would keep breaking up." - Delbert Mann from Rock Hudson: His Story

"IF you thought 'Pillow Talk' was a 'sleeper' when it popped up in 1959 as a comedy hit uniting Rock Hudson and Doris Day, wait till you see their latest, 'Lover Come Back', which came like a freshet of fluent fun and fancy into the Music Hall yesterday. 'Pillow Talk' was but a warm-up for this springy and spirited surprise, which is one of the brightest, most delightful satiric comedies since 'It Happened One Night'." - Bosley Crowther, New York Times Published: February 9, 1962

"... we made 3 movies together. I think of them always with good humor. They're always pleasant, always professional, always fun. Always laughing. We were laughing every minute of the time." - Tony Randall on Doris Day and Rock Hudson 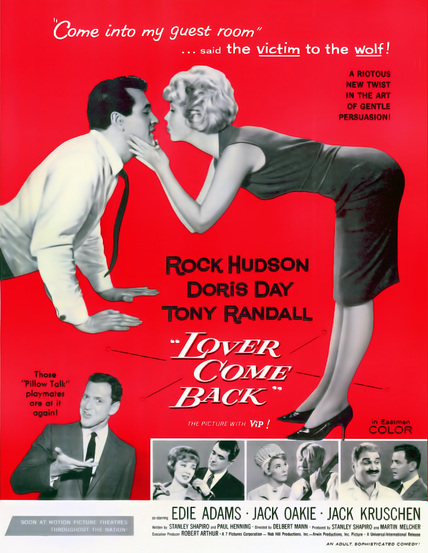 The sequel to Pillow Talk, with Rock Hudson and Tony Randall back again, for another great comedy.  Once again, the title tune was a hit. Some say this story was better than Pillow Talk.

Jerry Webster and Carol Templeton are both in the advertising business,  but for different agencies. Annoyed by Jerry's methods of using alcohol and  women to ensure contracts for his agency, Carol tries to get him thrown out of  his profession. To avoid this Jerry bribes the girl who'd testify against him, by starring her in a TV commercial for a product named VIP that he's just made up.

By accident these commercials are released prematurely. In order to keep his job, Jerry has to come up with a real product named VIP.  He enlists the aid of scientist Dr. Linus Tyler who has a brilliant idea: a candy that can produce a cheap drunk.  One individual piece would be equivalent to a triple drink.  The more you eat, the worse you get.

Carol decides to try to win the VIP account and goes to see Dr. Tyler.  When she arrives, Jerry is there, and she mistakes him for the scientist. Of course, he takes advantage of this in every way imaginable. When Carol discovers there is no VIP as yet and thus it was falsely advertised, she reports Jerry Webster to the ad council for a second time. When he arrives with a box of candy, everyone takes more than just one piece remarking at how refreshing it is. What happens to each person is one of the funniest things about the film. What happens to Jerry and Carol is a one night stand that includes a marriage certificate.

Although not as well known as Pillow Talk , this  romantic-comedy earned an Oscar nomination for Best Screenplay.


Jerry Webster: Okay, so I've sewn a few wild oats.
Carol Templeton: A few? You could qualify for a farm loan!

Carol Templeton: You kissed me and I was thrilled!
Jerry Webster: A kiss? What does that prove? It's like finding out you can light a stove. It doesn't make you a cook.


Jerry Webster: You're going up there to have my baby. My son. And I'm...
Carol Templeton: It's my baby and I'll have what I like. And I've decided I'm having a girl.
Jerry Webster: Have whatever you like. I love you both. Now will you marry me?


Doctor Linus Tyler: At last, I've given the world what it needs! A good 10-cent drunk!

"Lover Come Back" - Sung by Doris Day during the opening credits

"Should I Surrender" - Sung in the background by Doris Day

"At one point in the film, Jerry and Carol talk with an aquarium behind them, which holds a fish that is eaten by another as the scene ends. The 'aquarium' is clearly just a short loop of film being played forwards and backwards in succession - the fish repeats the same two motions over and over until it is eaten."

At the Movies: Episode #10.21 (2013) (TV Episode)
Mentioned by Margaret Pomeranz in a review of the classic movie Pillow Talk as another movie in which Doris Day and Rock Hudson appeared together.

"Voted One of the Year's Ten Best Films by the 1962 New York Times Film Critics."