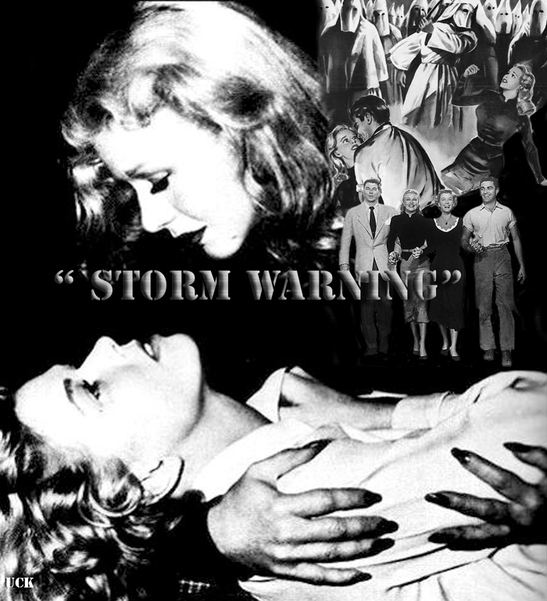 "A sombre but stirring and thought-provoking story, "Storm Warning" spotlights two new dramatic stars, Doris Day and Steve Cochran...Cochran is a standout...lovely Doris is very convincing as the loving wife..." - The Hollywood Reporter

"Every element that went into the filming of "Storm Warning" is of the best calibre. The performances, notably those of Ginger Rogers, Ronald Reagan, Doris Day and Steve Cochran, are superb." - Film Bulletin

"Surprise of the occasion is the successful casting of the singer Doris Day in a straight role that calls for considerable dramatic assurance." - Newsweek

"The direction by Stuart Heisler and the screenplay by Daniel Fuchs and Richard Brooks provided all that was needed to make this an exciting film. The supporting work by Hugh Sanders, Lloyd Gough and Ned Glass was strong. Praise must also go to the cinematography by Carl Guthrie whose photography helped sustain the film noir quality that was prevalent in so many Warner films."   - Ralph McKnight, New York, March 2002 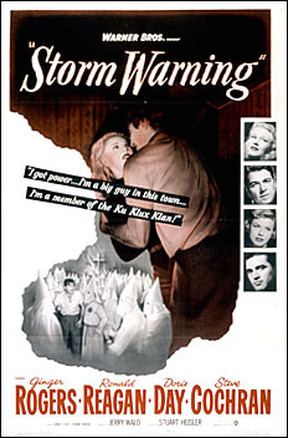 Doris sets another record-5 feature films in one year. The first of these was a non-musical drama about the Ku Klux Klan. Co-starring her movie Idol, Ginger Rogers, it is the only film in which Doris dies in the end.

For the second time in her newly-established career as a movie star, Doris appears in the secondary lead position. Ginger Rogers stars as a model visiting her sister (Doris)  in an unnamed small  town. She happens to witness the beating death of a man at the hands of the KKK.

Rogers soon discovers that the whole town is controlled by this vigilante group, and that her loutish brother-in-law Steve Cochran is one of the group's members.

D.A. Ronald W. Reagan is the man who breaks the stranglehold of the hooded terrorists --- through the simple expedient of walking into one of their meetings  and calmly identifying each of them by name. A mild expose' of the Ku Klux Klan, but it is never called that by name. Day's death at the end is the result of a shooting accident.


Cliff Rummel: I can't show the new summer line without a model.
Marsha Mitchell: Show 'em on hangers.
Cliff Rummel: Hangers haven't got what you've got!

Charlie Barr: I'll give you a tip, young fellow. Never go off half-cocked. Who's to say the Klan's involved? You got a witness? Don't drag people into anything unless you got solid legal evidence. Everything that happens in these small towns right away they blame it on the Klan.

Charlie Barr: Don't force me to show you how we handle people! We're the law here! We're the judges and the jury!

Marsha Mitchell: I'm no hero. I'm scared! That's what you wanted, and that's the way it is. Yeah, I'm afraid of what you might do to me. But if I ever get out of here, I'm gonna tell, and there's nothing you can do that'll stop me!

"Keep Cool, Fool"
Music by James P. Johnson and Josef Myrow
Played at the recreation center after the verdict


The studio wanted Lauren Bacall and Doris Day to star in the film, but Bacall went to Africa with her husband Humphrey Bogart to film The African Queen. Shortly after Bacall was released from her contract at Warner Brothers.

Joan Crawford was asked by studio boss Jack L. Warner to play Doris Day's sister in the film. Joan declined saying "Come on, Jack. No one would ever believe that I would have Doris Day for a sister!"

Doris Day's first non-singing role. The only movie in which she died.