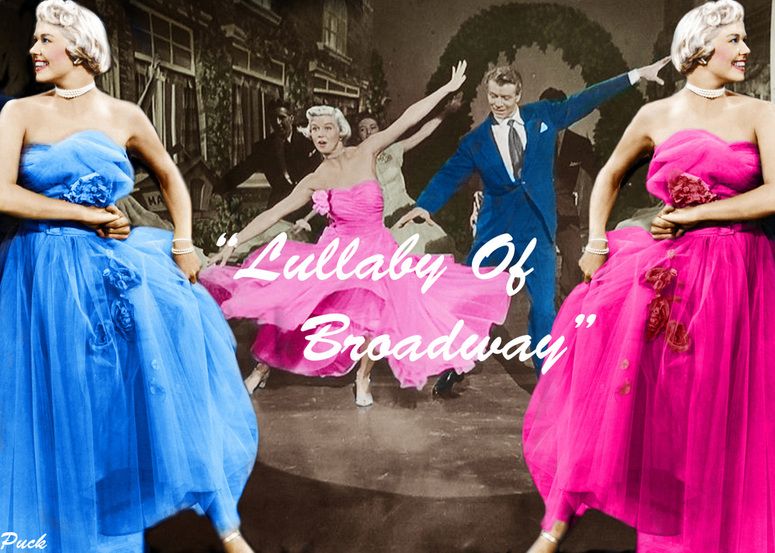 "Mounted in gorgeous Technicolor, and displaying the song-and-dance talents of co-stars Doris Day and Gene Nelson, Lullaby of Broadway has a solid comedy story line, deft direction and a capable cast." - Variety

"Excellent musical. Gay, tuneful and starring a vivacious pair, Doris Day and Gene Nelson, Lullaby of Broadway has been colorfully and lavishly produced, with quite a number of nostalgic songs featured throughout.... In addition to be thoroughly entertained by the fine singing and dancing of Doris Day and Gene Nelson, audiences will also enjoy Billy DeWolfe and S. Z. Sakall's comedy and specialty acts." - Showmen's Trade Review 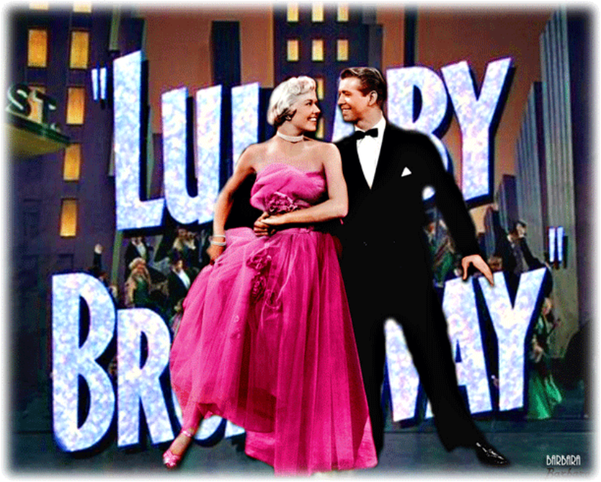 After being second banana in a few films, Gene Nelson gets a co-starring role. Doris and Gene do some amazing dancing. The soundtrack album reached #1 and the title song (the version recorded with Harry James) became a big seller that year.

Entertainer Melinda Howard (Doris) has been touring with a small theater company through the provinces, only being able to survive with the money sent to her from her Broadway star mother, Jessica Howard (Gladys George). Melinda decides to go back to New York to surprise her mother whom she hasn't seen in years. What Melinda doesn't know is that her mother is a washed up drunkard whose only job is to sing at a seedy after hours club --- that is when she's not in the hospital trying to sober up.

Melinda heads to the swanky Manhattan address her mother has provided, which in reality belongs to beer baron Adolph Hubbell (S.Z.Sakall), who also has financed some Broadway productions. He employs as his butler and maid Lefty Mack (Billy deWolfe) and Gloria  Davis, friends of Jessica's who also used to be in the theater. Intercepting Melinda, Lefty comes up with a plan to reunite mother and daughter for one night in the Hubbell house. Adolph goes along with the plan when he hears it is for Jessica's benefit. But the reunion can only happen if Jessica stays sober enough.

In the meantime, Melinda catches the eye of famed Broadway entertainer Tom Farnham (Gene Nelson), who wants to partner with her both professionally and personally. That partnership may be threatened by the ensuing father-daughter like relationship that develops between Adolph and Melinda, which is seen by others,  including a suspicious Anna Hubbell (Florence Bates) - Adolph's wife - as more a romantic one. The dancing partnership of Day and Nelson is well worth watching. This is a team to rival the best of Astaire and Rogers!

Melinda Howard:  I suppose I should be grateful for offering to make an honest girl of me. But I'm not grateful. I'm just disgusted.


Melinda Howard: [handing Tom a penny] There's a message on that to you from the women of the world.
Tom Farnham: In God We Trust


Gloria Davis: Take it from a girl who has been out with a lot of fathers in her time. Lead with your left!


Adolph Hubbell: Ferndale was right, you have no eye for beautiful women.
Lefty Mack: You shouldn't judge me by my wife!

"You're Getting to Be a Habit with Me" - Doris Day

"Just One of Those Things" - Doris Day

"Somebody Loves Me" - Doris Day and Gene Nelson

"Please Don't Talk About Me When I'm Gone" - Gladys George

"In a Shanty in Old Shanty Town" - Gladys George

"Zing! Went the Strings of My Heart" - Gene Nelson

"One day when Karl Malden wasn't needed on the set for a few hours, he took a tour of Warner Bros. He wore a business suit and no one recognized him as an actor. On the set of Lullaby of Broadway, he collected autographs of Doris Day, Gene Nelson, and Billy DeWolfe, just like others on tour." -  When Blanche Met Brando: The Scandalous Story of "A Streetcar Named Desire" By Sam Staggs