This page is dedicated to the co-stars of Doris Day. Check back often as we will be adding more every week. 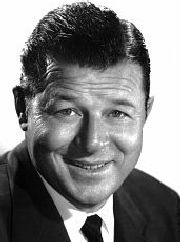 Jack Carson co-starred with Doris Day in three movies, Romance on the High Seas, My Dream Is Yours and It's a Great Feeling. Jack was a very popular character actor during the 30's-50's primarily in comedic roles. However, he did play some serious dramatic roles for which he received critical acclaim, Mildred Pierce (1945), Roughly Speaking (1945), A Star Is Born (1954) and Cat on a Hot Tin Roof (1958). Jack's career began in vaudeville but as that declined he sought roles in Hollywood landing some bit parts at RKO and MGM. Jack also had his own popular radio show beginning in 1943 which led to more movie roles and signing with Warner Brothers. Jack appeared on many television shows in the late 50's including Bonanza, The Martha Raye Show and The Twilight Zone. While rehearsing for the Broadway play Critic's Choice, Jack collapsed, later being diagnosed with stomach cancer. He passed away on January 2, 1963 at the age of 52. Doris considers Jack to be one of her early Hollywood mentors. (Doris dated Jack for several years. He was more serious about her than she was about him, very similar to the character roles in "My Dream is Yours".)
http://www.imdb.com/name/nm0007217/bio?ref_=nm_ov_bio_sm 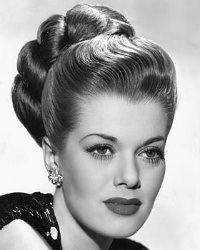 Janis Paige appeared in two of Doris Day's movies, Romance on the High Seas and Please Don't Eat the Daisies. She began her career as a singer at the Hollywood Canteen during World War II. There she was discovered by an agent from Warner Brothers and signed to a contract. Janis never quite found her niche in film so she left Hollywood for Broadway. There she hit her stride with hits like The Pajama Game and Remains to be Seen. She returned to Hollywood in the late 50's. One of the movies she received great reviews for was for her role of Marion, an institutionalized prostitute in The Caretakers (1963). She has also appeared on many television shows including her own It's Always Jan and others such as Trapper John, M.D., All in the Family and Columbo. Janis has her own website and www.janispaige.com.  (Janis and Doris remained friends for many years, despite the fact that when Pajama Game was filmed, Janis was one of the few original Broadway Stars who was replaced by Doris in the film version.
http://en.wikipedia.org/wiki/Janis_Paige 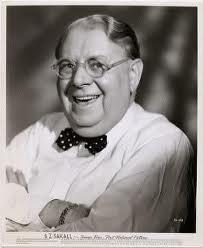 S. Z. Sakall was a Hungarian character actor. He co-starred with Doris Day in four films Romance on the High Seas, My Dream Is Yours, Tea for Two and Lullaby of Broadway. Sakall was a stage actor early on appearing in Hungary and then Vienna with great success. However, when the Nazis came to power in 1933, he had to return to Hungary. In 1940 he fled Hungary with his wife heading for Hollywood. Many of his relatives including all three of his sisters and his niece, as well as his wife's brother and sister were killed in Nazi concentration camps. For much of his film career he played the lovable uncle or good natured shop keeper. His most memorable role was that of Carl the head waiter in Casablanca. He worked for three weeks on that film and earned $5250. Sakall died of a heart attack on February 12, 1955. He is one of Miss Day's co-stars that she remembers with great affection.
http://en.wikipedia.org/wiki/S._Z._Sakall 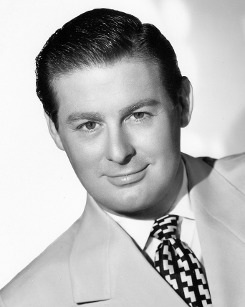 Don DeFore co-starred with Doris Day in the movie Romance on the High Seas. He played the jealous husband of Elvira Kent (Janis Paige). DeFore's first film was a small role in the 1936 film Reunion. He appeared in films such as Thirty Seconds over Tokyo,  A Guy Named Joe and The Facts of Life. He also did some radio work. But he is best know for his television work in The Adventures of Ozzie and Harriet and Hazel. DeFore also served as president of The National Academy of Television Arts and Sciences and on the board of the Screen Actors Guild. He died of cardiac arrest on December 22, 1993.
http://en.wikipedia.org/wiki/Don_DeFore 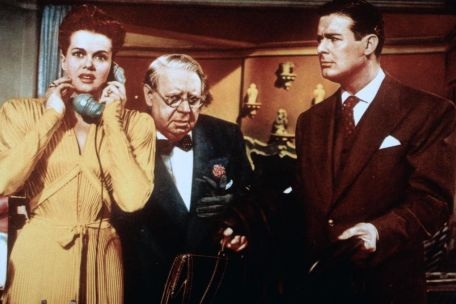 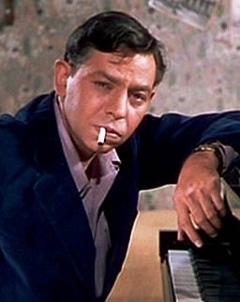 Oscar Levant was an American pianist, composer, author, comedian, and actor. He is best known in Doris Day terms for the quote "I knew Doris Day before she was a virgin." He appeared with her in Romance on the High Seas. In 1928 he set his sights on Hollywood and became friends with George Gershwin. He composed music for more than 20 films. He also was a guest on many television game shows and was a frequent guest of Jack Paar. Levant was very open about being a hypochondriac. He died on August 14, 1972 of a heart attack. His gravestone reads "I told them I was ill."
http://www.imdb.com/name/nm0505157/bio 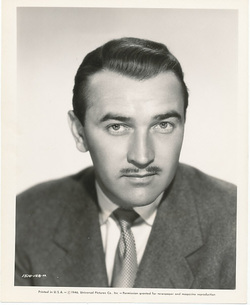 Lee Bowman like Doris Day was born in Cincinnati, Ohio. He studied at the New York Academy of Dramatic Arts. His first appearance in film was in 1937's I Met Him in Paris. Despite his leading man good looks he always got the role of the guy who never got the girl in the end. He played Gary Mitchell  the conceited singer/play boy in Doris Day's 1949 film My Dream Is Yours. His last film role was in 1950's House by the River. He then appeared in some television series starring in The Adventures of Ellery Queen and some guest star roles. Lee also did some radio shows and stage work. He retired from acting in 1968. He then went into private business as a corporate communications consultant.
http://en.wikipedia.org/wiki/Lee_Bowman 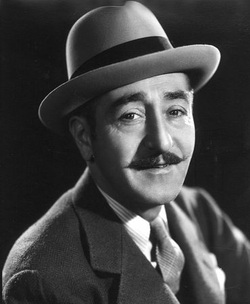 Born in Pittsburgh, Pennsylvania Adolphe Menjou often played the suave wealthy aristocrat. He was known for his trademark mustache and for always being very well if not overdressed. Not many know that his career began in silent films. The studios were grooming him as rival to Rudolph Valentino. He received an Oscar nomination for Best Actor in The Front Page in 1931. He also spoke six languages. He appeared in Doris Day's My Dream Is Yours.
"It was my mustache that landed jobs for me. In those silent-film days it was the mark of a villain. When I realized they had me pegged as a foreign nobleman type I began to live the part, too. I bought a pair of white spats, an ascot tie and a walking stick." - Adolphe Menjou
http://en.wikipedia.org/wiki/Adolphe_Menjou 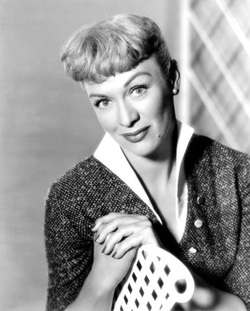 Eve Arden born Eunice M. Quedens in Mill Valley, California had a long career that spanned  film, radio and television for close to six decades. She is most well known for playing the role of the wise cracking sidekick. She appeared in such notable films as Mildred Pierce, for which she received an Academy Award Nomination for Best Supporting Actress. Baby boomers may remember her as Miss Brooks in the television series Our Miss Brooks or from her role as the principal in the movie Grease. She had two co-starring roles with Doris Day, My Dream Is Yours and Tea for Two.
http://www.imdb.com/name/nm0000781/bio?ref_=nm_ov_bio_sm 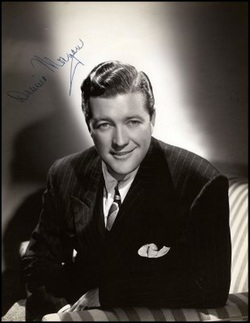 Earl Stanley Morner was born in Prentice, Wisconsin. His first acting name was Richard Stanley. He then changed it to Dennis Morgan. He starred in many war time dramas alongside actors such as Ginger Rogers, Barbara Stanwyck and Sydney Greenstreet. He also starred with best friend Jack Carson in many Warner Brothers comedies among them It's a Great Feeling with Doris Day. In addition to film, Morgan guest starred in many television roles from Alfred Hitchcock Presents to The Love Boat. He passed away in 1994 of respiratory failure.
http://en.wikipedia.org/wiki/Dennis_Morgan 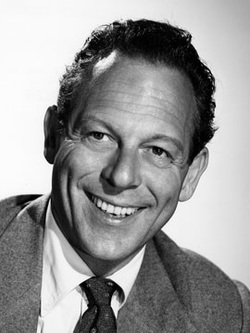 Bill Goodwin appeared in a number of films and television series among them The Jolson Story, Spellbound and The George Burns and Gracie Allen Show. He appeared in three Doris Day movies: It's a Great Feeling, Tea for Two and Lucky Me. Unfortunately he passed away at the young age of 47 from a heart attack.
http://en.wikipedia.org/wiki/Bill_Goodwin 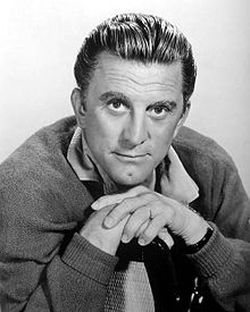 Kirk Douglas born Issur Danielovitch Demsky in Amsterdam, New York is an American screen legend appearing in 88 movies. Known for his distinctive cleft chin he is number 17 on the AFI's list of the greatest male screen legends in American film history. Douglas was nominated for Oscar for his performances in 1949 Champion, 1952 The Bad and the Beautiful and 1956 Lust for Life. He co-starred with Doris in 1950's Young Man with a Horn. He is also the father of actor Michael Douglas. To learn more visit http://www.imdb.com/name/nm0000018/bio?ref_=nm_ov_bio_sm. 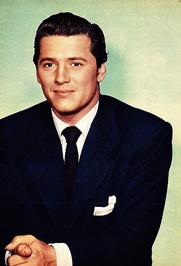 Gordon MacRae appeared in five movies with Doris Day, Tea for Two, The West Point Story, On Moonlight Bay, Starlift and By the Light of the Silvery Moon. He was a close friend of hers until his death in 1986. Gordon also had the leading roles in the musical film versions of Oklahoma and Carousel. He achieved great success in radio, television and on the stage as well.
http://www.imdb.com/name/nm0534286/bio

'His voice was magnificent, and no one sang like him. We had so much fun when we made films together, and our favorites were 'On Moonlight Bay' and 'By the Light of the Silvery Moon...'' - Doris Day on the passing of Gordon MacRae