The Magic of Doris Day... Too Marvelous for Words
The Doris Day RADIO Show premiered over CBS radio in a 25-minute format on Friday, March 28th 1952. Doris made her first solo outing in a radio series a family affair. Drawing on the many artists and friends that had helped her during her meteoric rise to stardom, The Doris Day Show's guests for her premiere program were Danny Thomas, her co-star from I'll See You In My Dreams (1952) and Mrs. Gus Kahn, the wife of prolific songwriter Gus Kahn. I'll See You In My Dreams was based on the life of Gus Kahn and his wife Grace. Danny Thomas had portrayed Gus Kahn and Doris Day portrayed Grace Kahn.

Over the course of the next year, Doris Day's featured guests continued to be drawn from her co-stars in film and the key musical artists that had helped her achieve her success. Ray Bolger, Gordon MacRae, Kirk Douglas, Danny Thomas, Cornel Wilde, Howard Keel, George Murphy, Frankie Laine, Gene Nelson, Mary Wickes, and Ronald Reagan had all co-starred with her in film.

Day's premiere program also set the tone for another recurring feature throughout the series--regular reminders of the sacrifices being made by American Armed Forces in Korea--and throughout the world. For the remainder of the half-hour run of The Doris Day Show, Doris dutifully granted written requests from G.I.s and their units around the world for a favored song during her programs. The weekly show also gave Miss Day the opportunity to plug many of her recordings and helped to further cement their popularity.

During the Summer of 1952 Lever Brothers approached CBS and Doris Day with a twice-weekly 15-minute live production, but Doris Day turned it down. She wanted to preserve her freedom to do film work. Two-a-week live broadcasts would have been too limiting. Much to CBS's relief, Rexall Drugs was casting around for a Summer filler to sponsor while The Amos 'n' Andy Show took it's Summer break for 1952. Rexall picked up the tab through the 26th installment of The Doris Day Show.

When Rexall's sponsorship ran out, CBS thought the timing might be right to use The Doris Day Show to promote their ambitious plans to launch a line of custom high end televisions under their CBS-Columbia, Inc. subsidiary.  As late as December 1, 1952 when the two-page LIFE magazine ad appeared, CBS-Columbia was gambling that their deal for a disused Mack Truck plant would provide them the manufacturing plant they needed to produce their new televisions. That deal fell through in January 1953. CBS-Columbia pulled their sponsorship of The Doris Day Show when the deal fell through.

The show reverted to sustaining through March 24th 1953, almost a year to the day from the series' premiere. CBS attempted to carry the production further in an abbreviated, 15-minute format, with Louella Parsons occupying the first 10 minutes of the previously slotted 25-minute Doris Day programs. That last format change spelled the beginning of the end for the series. The Doris Day Show left the air after nine more, 15-minute programs. As Doris Day would later famously sing, "Que Sera, Sera." That, however, was not the end.  The show was picked up by the Armed Forces Radio Network and broadcast, in its entirety, throughout Europe until the end of August 1953 with augmented segments.


Here are some recordings from the Doris Day Show

Here's another link to a website we found that has a collection of mp3's of the radio show.
http://www.doctormacro.com/Radio Listings/RL-DorisDayShow,The.htm

Those times when Doris appeared on various radio programs, mostly in the 50's, including her own show: 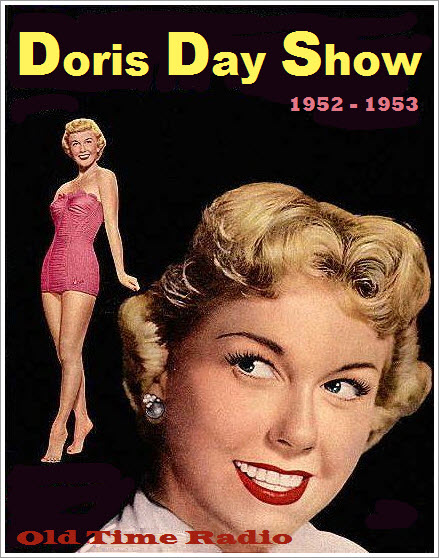