"For again the adroit Mr. Shapiro has written a lively, lilting script, this one with Nate Monaster, that has as much glittering verbal wit and almost as much comic business as 'Pillow Talk' and 'Lover Come Back', in which Miss Day and Mr. Hudson were apparently inalterably joined. And Mr. Mann has directed it with that briskly propulsive pace and that pin-point precision in timing sight-gags that are the distinction of his bright new comic style." - By BOSLEY CROWTHER New York Times Published: June 15, 1962

"The world misses my father's movies and so do I. I'm continually questing for that giddy, yearn-inducing, ticklish movie going experience." - Jennifer Grant from Good Stuff: A Reminiscence of My Father, Cary Grant

"Cary was always impeccably dressed. It didn’t matter if he was arriving for rehearsal or for a production meeting, he was beautifully dressed at all times. He took clothing very seriously." - Doris Day National Post February 25, 2012

"In the scenes we played, he concerned himself with every little detail: clothes, sets, production values, the works. Cary even got involved in helping to choose the kind of mink I was to wear in the film." - Doris Day from Doris Day Her Own Story 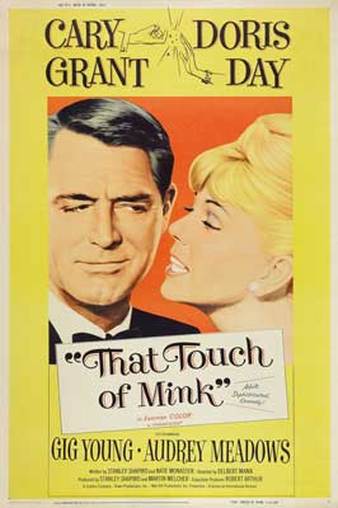 That Touch of Mink is very similar to the Rock Hudson/Doris Day romantic comedies of the late 1950’s and early 1960’s. The big difference is that Cary Grant is filling in for Rock Hudson, whom rumor said was not available. A few of the supporting players have been changed as well. Gig Young is in the sidekick role and Audrey Meadows is the wisecracking loyal friend. It was released in 1962 and is the only movie Day and Grant made together.

When people refer to Doris Day as "the world's oldest professional virgin," they generally have  this film in mind. It isn't that Cathy Timberlake (Day) is above a bit of hanky-panky; it's just that she wants such tangibles such as a marriage license and wedding ring first.

Thus, when playboy businessman Philip Shayne (Cary Grant) begins actively  pursuing Cathy (they met when Philip's limo splashed mud on her), she won't say "I will" until he says "I do." She is of the idealistic opinion that she can bring out the best intentions in  him, even when he repeatedly tips off his worst intentions by inviting her to accompany him to Philadelphia, Baltimore, and Bermuda.

After many complications and misunderstandings, Cathy finally finagles a proposal from Philip. The film is essentially much ado about nothing, but it is so well-acted and  attractively photographed that the audiences are willing to go along for the  ride. The high-powered supporting cast includes Gig Young as Roger, Philip's moralistic financial advisor; Audrey Meadows as Connie, Cathy's wise-cracking  roommate; Alan Hewitt as Dr. Gruber, a confused psychiatrist; John Astin as  Beasley, Cathy's slimy would-be beau; Dick Sargent as a neurotic honeymooner; and an unbilled Richard Deacon as an all-around letch. An excellent screenplay, beautiful art direction and a stunning fashion show add to the film's charm. Ironically, this is one of the few films where Day does not sing at all, even over the credits.

Connie Emerson: He's so low that when they bury him, they'll have to dig UP!


Cathy Timberlake: And I'm unstable. What kind of mother would I make for our children?
Philip Shayne: Well we'll try three or four if that doesn't work out, we'll breed poodles.

There were no songs associated with this film.

"In her autobiography, Doris Day wrote that Cary Grant was very professional and exacting with details, helping her with her wardrobe choices for the film and decorating the library set with his own books from home. However, he was a completely private person, totally reserved, and very distant. Their relationship on this film was amicable but totally devoid of give-and-take."

"Rock Hudson had expected to be cast as Philip, but director Delbert Mann wanted Cary Grant.  This partially explains the long delay in another film starring Doris with Hudson."


Kiss Me, Stupid (1964)
Barney mentions it when listing what Orville's wife deserves

Childhood's End (1996)
In the bridal salon they ask the manager for dresses like in old Cary Grant and Doris Day movies, and the manager replies, "Like in Touch of Mink?"

Touch of Pink (2004)
The dialogue between Alim's mother and Giles on a London street.

"Cary Grant was a big fan of The Honeymooners (1955) and Audrey Meadows in particular, and was responsible for getting her the part of Connie."

"Clearly modern idea’s about sexual harassment and domestic violence didn’t exist then either. In one scene a man at the unemployment office threatens not to give Day her check unless she goes on a 'date' with him. In another scene a man tells Grant that his wife doesn’t want to sleep with him any more. Grant asks him what he did about it and the man casually says, 'I belted her.'”

Picking out the Wardrobe in NYC