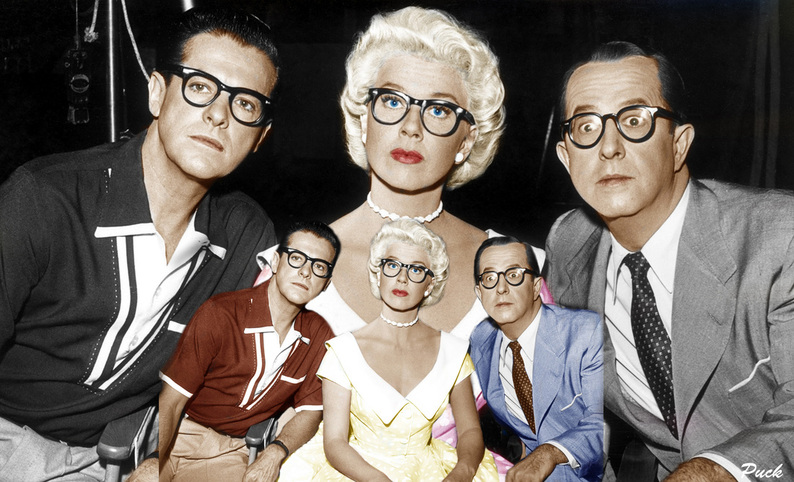 "When Doris learned she was assigned to appear in 1954's Lucky Me, she was dismayed with the script. 'There were times I didn't like scripts I had to do. But a deal was a deal,' she later said. 'I felt it was wrong to go on suspension. My working in a film and being good in a film didn't depend on Jack Warner. [It was] someone much higher. And I just put my trust where it was supposed to be and I just said, 'I know that nothing is going to hurt me. I will give 100 percent.'"
- Doris Day: Sentimental Journey By Garry McGee

"It's up to Day to carry this musical to success, and she responds nobly..." - Photoplay

"Doris Day handles tunes and performance in usual vivacious manner that will score with her fans." - Film Bulletin 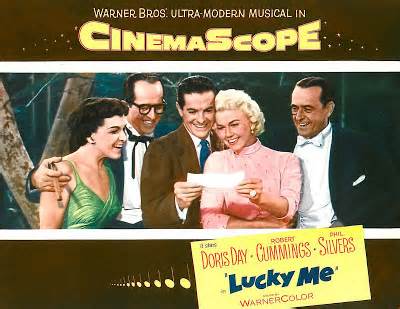 Not one of Doris’ most popular films, the chemistry between her and costar Robert Cummings was not discernible. The hit tune was “I Speak to the Stars”. No soundtrack album was released.

In Miami, superstitious, but very lucky showgirl Candy Williams (Doris) narrowly misses several catastrophes as she makes her way to the theater. There, after a performance of the show Parisian Pretties for an audience of thirteen, she and the other members of her troupe, manager Hap Snyder (Phil Silvers), comedian Duke McGee (Eddie Foy Jr.) and dancer Flo Neely (Nancy Walker), are thrown out.

Finding his troupe broke, stranded and hungry, the resourceful Hap tricks the show's only fan, policeman Barney Mahoney, into agreeing to make a phony arrest, after the troupe has had a chance to eat a big meal at the expensive restaurant, Anton's. However, Mahoney goes off duty while they are dining, and when a different policeman responds to Hap's pre-arranged signal, the troupe must work off the meal in the kitchen to avoid a real arrest.

While cleaning the hall floors of the adjoining hotel, Flo overhears Dick Carson (Robert Cummings), a successful Tin Pan Alley composer, talking to his agent, Tommy Arthur,  about a musical show he is writing and wants produced. Dick is hoping that oil magnate Otis Thayer, the father of Lorraine, a possessive woman he has been seeing, will back the show after Dick presents some of his songs at Thayer's upcoming birthday party. Lorraine shows up, and although Dick tries to make it clear to her that he wants her father's backing to be a purely business deal and that his personal interest in her is limited, Lorraine persists in trying to buy his love.

Later, while trying to avoid black cats and sidewalk cracks, Candy causes Dick to crash his car. At the garage, the mechanic offers the loan of his car, an old clunker bearing the garage's business logo. After driving away, Dick narrowly escapes a second accident caused by Candy, but feels an instant attraction for her. He invites her on a date, and lets her believe that he is a mechanic, as the sign on the car indicates.

After seeing Candy and Dick leave for their date that night, Hap follows them to a beach restaurant and introduces himself, hoping to get work for the troupe in Dick's new musical. Candy gets angry and leaves when she realizes that Dick has deceived her about his identity, but Dick agrees with Hap to secretly watch the troupe practice in Anton's dining room after hours. At the rehearsal, Dick and Candy make up, and Dick offers her and her companions roles in his show.

However, later, after seeing Candy and Dick rehearsing, Lorraine jealously insists that Candy cannot be in the show if Dick wants Thayer's backing. Candy, presuming that Dick gave Lorraine reason to feel possessive of him, quarrels with Dick and distrusts his declaration of love for her. When Dick loses interest in his show and leaves for New York, Candy realizes he does love her and decides to help him.

Disguised as genteel English persons, Candy, wearing a black wig, and Duke crash Thayer's birthday party, and are soon joined by Flo and Hap, who impersonate wealthy Texans. Together they lure Lorraine out into the pool. While Lorraine is out of the way drying off, Candy takes off her wig and sings Dick's songs for the guests. Having enjoyed Candy's performance, Thayer is ready to sign a check, but Lorraine interrupts, claiming misrepresentation.

Meanwhile, Dick has returned to Miami to face Thayer and tactfully tells him that he is not interested in romancing Lorraine for the money. However, Thayer is aware that Lorraine manipulates men with her wealth and is still interested in backing the show. To encourage Thayer to act immediately, Hap starts a bidding competition and almost causes Thayer to back out, but Candy announces that they will only accept Thayer's money.

For the second time, Thayer prepares to sign a check, but the deal is again in jeopardy when Candy, realizing the date is Friday the thirteenth, almost stops him. However, to the relief of her friends, Candy renounces her superstitions, finally realizing how lucky she is. Somewhat convoluted, but it's still a fun picture.

Hap Schneider: What's with the ain'ts? Ain'ts. There are a lot of ritzy people here. Watch your language.

Flo: What are you talking about? I speak as well as anybody. In fact, weller.


Otis Thayer: Ooh, Friday the Thirteenth. Anyone around here superstitious?

"I Wanna Sing Like an Angel" - Performed by Doris Day

"I Speak to the Stars" - Performed by Doris Day

"Lucky Me" - Performed by Robert Cummings (dubbed by Hal Derwin)

“I Speak to the Stars” became a top hit for Doris in 1954, the same year as “Secret Love” and “If I Give My Heart To You”. The only other side released (on the flip side of the single) was “Blue Bells of Broadway” which only charted for two weeks.

"This is the first musical to be filmed in CinemaScope."