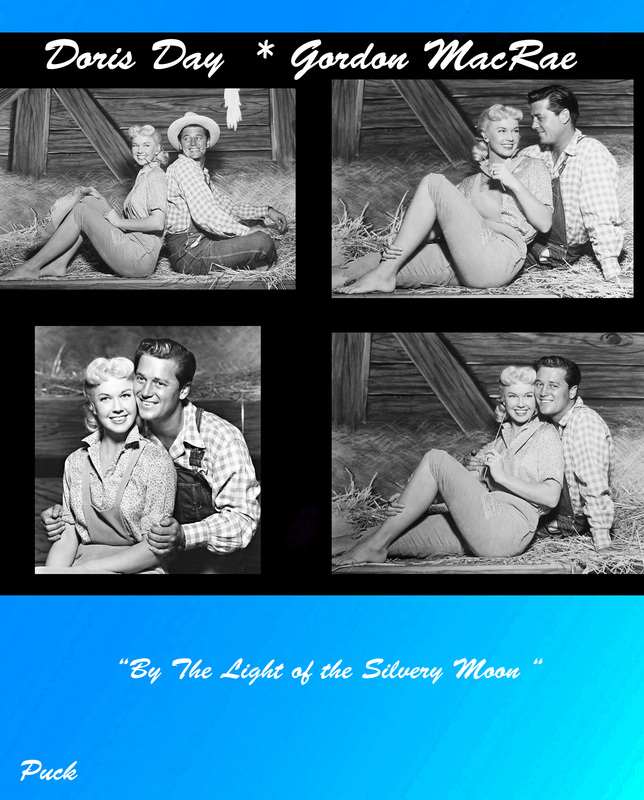 ''His voice was magnificent, and no one sang like him. We had so much fun when we made films together, and our favorites were 'On Moonlight Bay' and 'By the Light of the Silvery Moon...'' - Doris Day on the passing of Gordon MacRae

"I seriously suffered at the age of 10 over Doris Day. I loved her in By the Light of the Silvery Moon. She looked so completely in love and had that wholesome quality." - Colin Firth

I did have a sleepless night over Doris Day when I was eight and By the Light of the Silvery Moon was on TV. She had that pure quality, but she always seemed within an inch of giving in to being absolutely, um, ah..." - Colin Firth 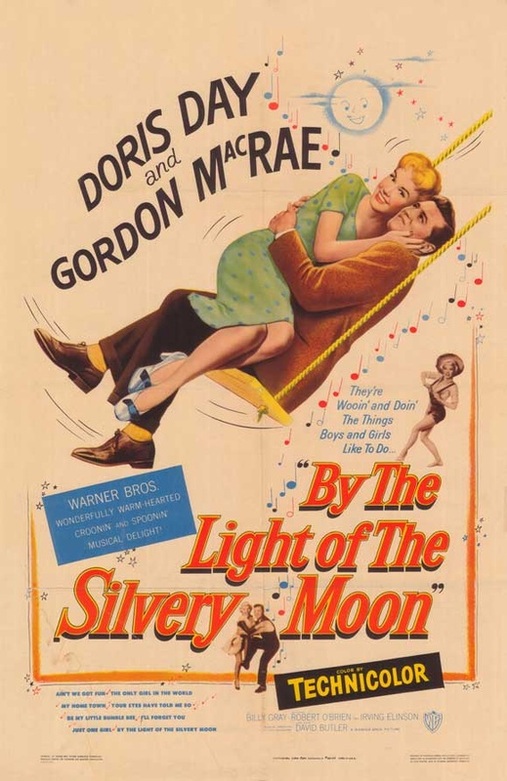 Finally, the sequel to MOONLIGHT BAY with the same cast (minus Jack Smith) and Doris’s last film with Gordon MacRae. Great turn of the century tunes in a soundtrack album that reached #3 in album sales, at the time cementing a title that Doris Day retains: Biggest Selling Female Album Artist of the 1950’s.

As a sequel, this film, too, is  based on the "Penrod" stories by Booth Tarkington. Penrod himself (played by Billy Gray) takes a back seat to the main plot, concerning the hot-and-cold romance between Doris Day and Gordon MacRae.

Gordon will not marry Doris until he is financially able to do so, which results in several breakups and reunions before the final clinch at the local ice rink. A subplot involves Penrod's suspicions that an attractive French actress (Maria Palmer) is not only romancing his father (Leon Ames), but is also an enemy spy!

Set shortly after the end of World War I, Silvery Moon takes full advantage of that era's popular songs. If you don't blink, you will catch a glimpse of Merv Griffin in the final scene (as the bandleader at a skating rink).
Movie Quotes

Father Winfield: [about his tomboy daughter getting married] Well, I feel like I'm losing a son.

Stella: [to the camera] Wesley is their second child. If he had been the first, there never would have been a second! Oh... You're probably wondering who I am. Well, don't be so nosy!

Father Winfield: [about Wesley's pet turkey] For the last time, that turkey does not belong in the house!


Marjorie Winfield: Bill, it's so difficult for me to ask you to understand, but... Why I can't possibly think of marrying you right now. And I can't tell you why.

Bill Sherman: What do you mean you can't tell me? Why, I'm almost your husband! At least, I thought I was.

Marjorie Winfield: You will be. Someday. But for now Bill, couldn't you please be sweet and understanding?

Bill Sherman: But I don't want to be sweet and understanding! I want to be a husband!

Bill Sherman: It never entered my mind, Marjorie, that you ever had any doubt about your feelings towards me. But now everything's quite obvious. You're not even sure I'm the man you want to marry!

"By the Light of the Silvery Moon" - Sung by a chorus during the opening credits, Doris Day, Gordon MacRae, Leon Ames, Rosemary DeCamp and others. Played often throughout the film.

"Minuet in G" - Played by Wesley on the piano

"Selections from the film score were featured on a 'Doris Day (I)' 10-inch LP for Columbia which crested in third place on the 'Billboard" popular albums chart." - IMDB (Internet Movie Database)

"This film departs from "On Moonlight Bay" in three main ways. First, the film opens with Stella breaking the fourth wall, addressing the audience directly as she introduces the Winfield family. Second, the song and dance numbers are played like a traditional musical, while the original film incorporated the songs more organically within the story. Finally, the bespectacled music teacher, although the same basic character with the same mannerisms, has a different name and is played by a different actor, the only member of the cast who did not carry over from the original film." - IMDB (Internet Movie Database)