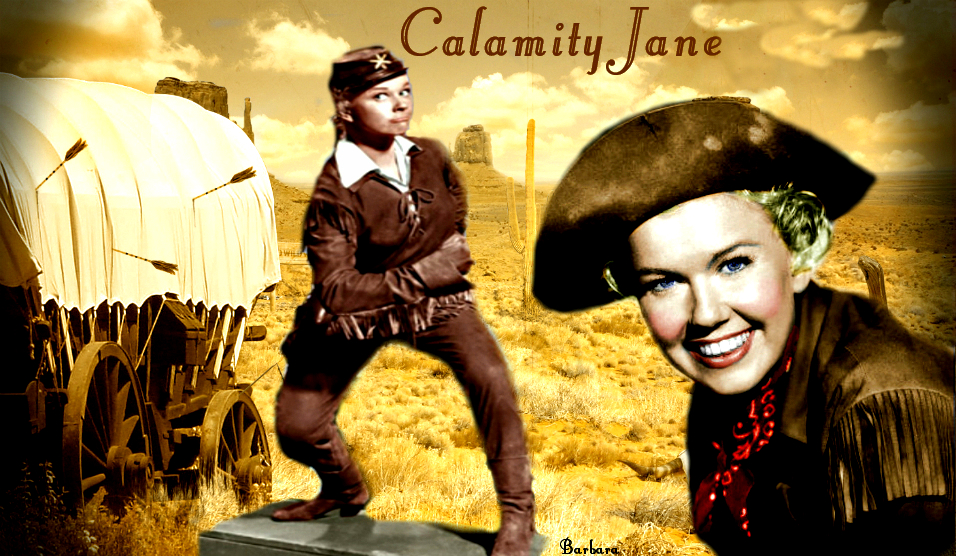 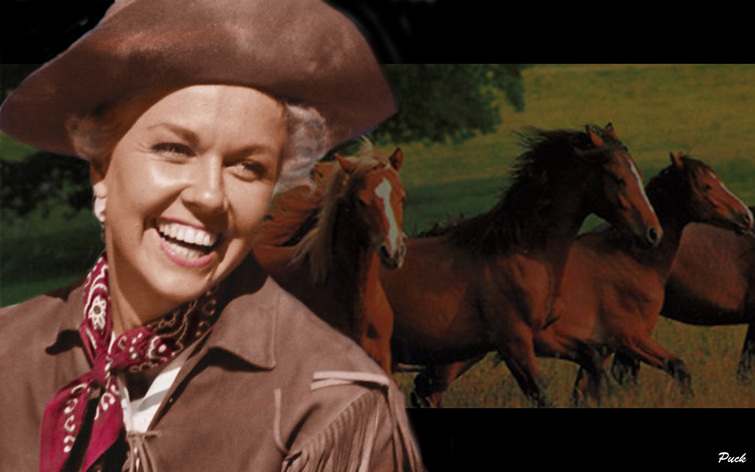 “In 1953 I made one of my favorite musicals, Calamity Jane... I loved portraying Calamity Jane, who was a rambunctious, pistol-packing prairie girl (I lowered my voice and stuck out my chin a little). I can’t say that the physical high jinks of jumping on horses, bars, wagons, and belligerent men or doing pratfalls in muddy streams seemed to be particularly exhausting…I had a great working relationship with my costar, Howard Keel, and absolutely first-rate songs to sing (by Sammy Fain and Paul Webster), one of which, ‘Secret Love,’ became my third million-plus recording and won that year’s Academy Award.” - Doris Day, Her Own Story

"When I first heard 'Secret Love' I almost fainted, it was so beautiful. When we finally got around to doing the pre-recording, Ray Heindorf, the musical director at Warner's, said he'd get the musicians in about 12:30 so they could rehearse. That morning I did my vocal warm-up, then jumped on my bike and rode over to Warner's - we lived in Toluca Lake at the time, which was just minutes from the studio. When I got there I sang the song with the orchestra for the first time. When I'd finished, Ray called me into the sound booth, grinning from ear to ear, and said, 'That's it. You're never going to do it better.' That was the first and only take we did." - Doris Day, Her Own Story

"It is no accident that “Secret Love” hit number one on the pop record charts, garnered Day a gold record single, won the 1954 Academy Award for Best Song, and in 1999 was inducted into the Grammy Hall of Fame. Like any great piece of popular art, its appeal has lasted through the years, and five decades later, when people speak of Calamity Jane, this is the sequence imprinted upon their memories." - Santopietro, Tom (2008-08-05). Considering Doris Day (Kindle Locations 1379-1381). St. Martin's Press. Kindle Edition.

"There's a kind of crisp androgynous something that is nice--she has backbone and spunk that I think give her a kind of stiffness in the mind." - John Updike 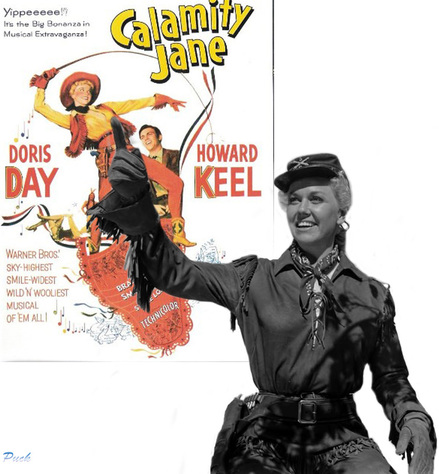 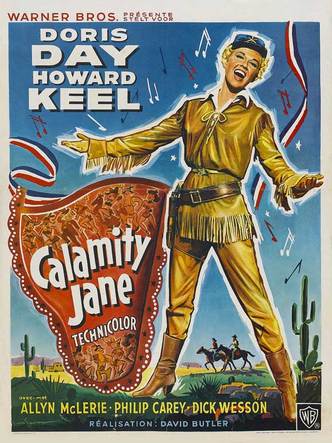 Click to set custom HTML
UK Polls list this as their all time favorite musical film; it was popular in the US as well, costarring Howard Keel. This film gave Doris her first Oscar for Best Song with “Secret Love”. The soundtrack was one of the biggest sellers of the year. It is Doris’s favorite of all her films, along with “Pillow Talk”.

It is loosely based on the life of Wild West heroine Calamity Jane and explores an alleged romance between Calamity Jane and Wild Bill Hickok in the American Old West. The film  was devised by Warner Brothers in response to the success of Annie Get Your Gun.

Deadwood, Dakota Territory, is largely the abode of men, where Indian scout Calamity Jane is as hard-riding, boastful, and handy with a gun as any; quite an overpowering personality. But the army lieutenant she favors doesn't really appreciate her finer qualities. One of Jane's boasts brings her to Chicago to recruit an actress for the Golden Garter stage.

Arrived, the lady in question appears (at first) to be a more feminine rival for the favors of Jane's male friends...including her friendly enemy Wild Bill Hickok. Calam's attempt to bring in Adelaide starts a series of events which make Calam examine her feminine side, and what it may take to get Danny to propose. But in doing so, Calam ultimately realizes that what she really wants in life has been there all along.  Songs like "Deadwood Stage" and "Just Blew In From The Windy City" keep this lively comedy right in the groove and quickly explains why it has become one of Doris's most shown films on television.


[the singer is a man in drag]
Wild Bill Hickok: She ain't very good lookin'
Calamity Jane: That ain't all she ain't.


Calamity Jane: That's better. Next time I tell a story, keep your hands in your pockets you toothless old buffalo!


Lieutenant Gilmartin: Why do we both have to ride the same horse? We could have grabbed one of those Indian ponies.
Calamity Jane: It's cozier this way!

"It's Harry I'm Planning to Marry" - Performed by Gale Robbins, then by Allyn Ann McLerie

"Hive Full of Honey" - Performed in drag by Dick Wesson

"Secret Love" - Performed by Doris Day, which topped the Billboard and Cash Box musical charts at number one.

"Keep It Under Your Hat" - Performed (twice) by Allyn Ann McLerie

"Though the film portrays Calamity Jane and Wild Bill Hickok as lovers, historians have found no proof that they were more than acquaintances. Jane claimed after Hickok's death that she had not only been his lover but also his wife and the mother of his child, but she offered no substantiation of her claims. Many of her contemporaries considered her a teller of tall tales who exaggerated her links to more famous frontier figures, and some insisted Hickok did not even particularly like her. But when she died decades after Hickok, friends buried her beside him at her request."

"In the scene after the dance, when Calamity and Wild Bill Hickok return to her place, she is wearing a fancy, floor-length off-the-shoulder dress - no straps. Calamity asks Bill to turn around so she can change. After Bill turns, the cut back to Calamity reveals her wearing an undergarment with wide straps over the shoulders and a pair of bloomers."

"When Calamity and Katie arrive in town after leaving Chicago an extra bag appears on the roof beside the large suitcase. This bag was not there during the shoot out with the Indians."

"A Columbia Records album of selections from the Sammy Fain-Paul Francis Webster film score was comprised of four songs directly from the soundtrack (supervised by Ray Heindorf), and four tunes commercially rerecorded by Doris Day alone (arranged and conducted by Paul Weston). The original 10-inch LP has been transferred to CD in Britain by Prism Platinum. In 1995, another English label, Jay Records, re-created the complete film score, adding five numbers from the 1979 British stage production. "

"During early 1954, music from this film reigned supreme in Billboard. Number one among the singles was a Doris Day trademark, the Oscar-winning, tender ballad, 'Secret Love' (music by Sammy Fain, lyrics by Paul Francis Webster). Also, the Day-Howard Keel 10-inch LP of songs from the score, issued by Columbia Records, zoomed to second place amongst the popular albums."

"Doris Day recorded the song 'My Secret Love' in only one take."

"When Calamity rides into the Indian camp to rescue Dan, she fires seven shots from her six-shooter in such rapid succession she would have had no time to reload."