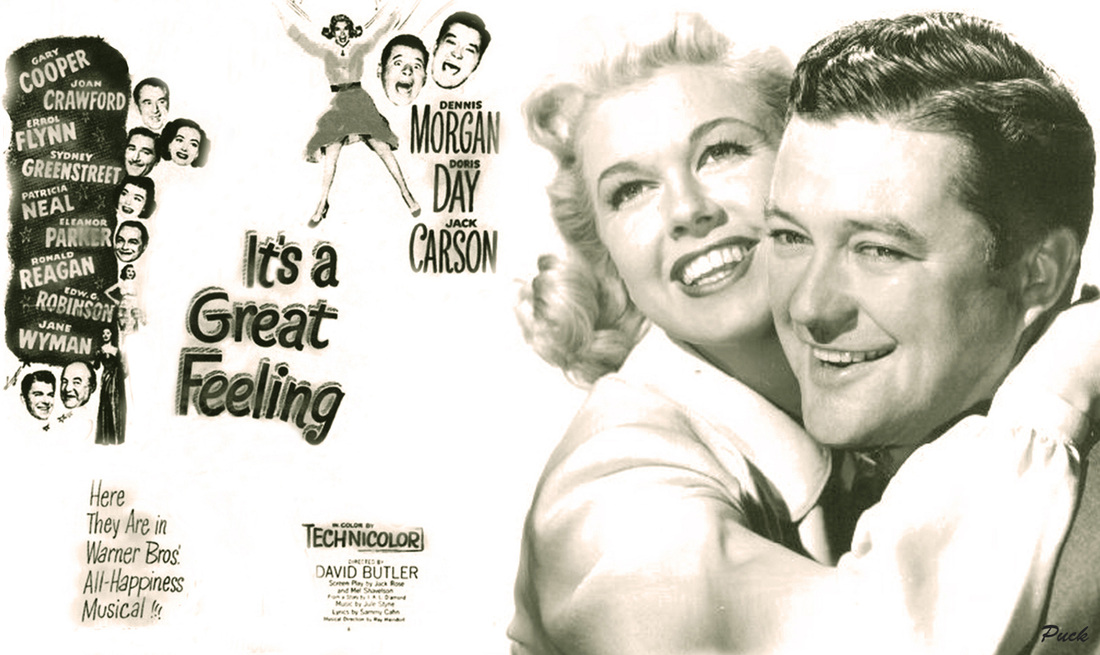 “Some of the downbeat pictures, in my opinion, should never be made at all. Most of them are made for personal satisfaction, to impress other actors who say ‘Oh, God! What a shot, what camera work!’ But the average person in the audience, who bought his ticket to be entertained, doesn't see that at all. He comes out depressed." - Doris Day

"Curiously, both 'Great Feeling' and Day's previous film, 'My Dream Is Yours',  found her playing a hopeful talent new to show biz, a parallel to Warners' own hopes of introducing a new starlet. "Great Feeling" plays like a Day screen test, allowing her to try a little of everything: her songs range from gentle to raucous (her faux-French spin on "At the Café Rendezvous" is a highlight), while her overplayed run-ins with Bill Goodwin counter nicely with her more down-to-earth approach in other scenes. Day may be left mostly playing it straight to Morgan and Carson's clowning, but she also holds her own against them." - DVD Talk (David Cornelius) 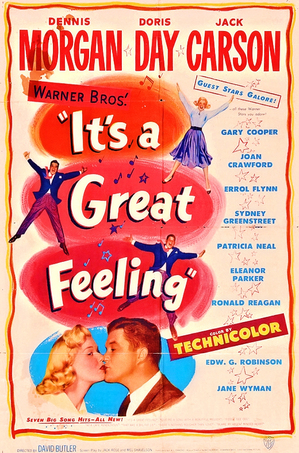 Attempting to line up  a director for their next picture, the boys find themselves unable to do so due  to Carson's gigantic ego. Carson decides to direct their next vehicle himself;  the next problem is locating a leading lady who'll be willing to put up with  Carson. The boys discover Doris Day, a waitress in the Warner Bros. commissary.

Carson and Morgan spend their entire shooting schedule vying over Day's affections; she gets fed up with this, and heads back to her home town in  Wisconsin, there to marry her childhood sweetheart Jeffrey Bushdinkel--who is  revealed in the final shot to be none other than Errol Flynn!

Other guest stars popping in and out of It's a Great Feeling include Gary Cooper, Joan Crawford,  Sidney Greenstreet, Danny Kaye, Patricia Neal, Eleanor Parker, Ronald Reagan, Edward G. Robinson and Jane Wyman. Also appearing as themselves are such Warner  Bros. directors as David Butler (the real director of It's a Great Feeling),  Michael Curtiz, King Vidor and Raoul Walsh.


Jack Carson: But Dennis! Dennis, you've got to help me find a leading lady. Look. We're pals! Buddies! When you first came to Hollywood, down on your luck, broke, didn't have what to eat, who gave you the first square meal?

Jack Carson: Well, who phoned them?

Dennis Morgan: Who gave you the nickel?

Jack Carson: It was a slug!


Jack Carson: [after being slapped] What was that for?

Joan Crawford: Oh, I do that in all my pictures.

"Joan Crawford does a cameo and directs a short speech to Jack Carson before slapping his face. It's the same one she gives to Ann Blyth in Mildred Pierce before slapping her face. Carson co-starred in that film with Crawford." - IMDB (Internet Movie Database)