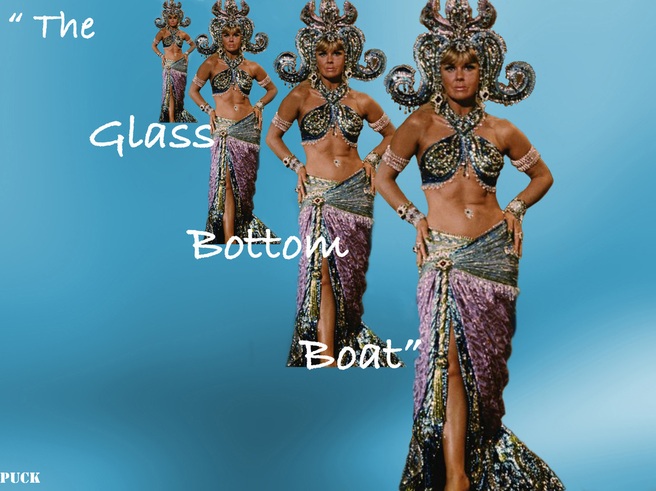 "I believe in Doris Day." - Lucille Ball when asked who her favorite comedienne is.

"For the silliness it is, it's brilliant due to Tashlin's magical sleight of hand in drawing comedy by his irreverence. It's just a wonderfully stupid comedy. " - Dennis Schwartz: "Ozus' World Movie Reviews" 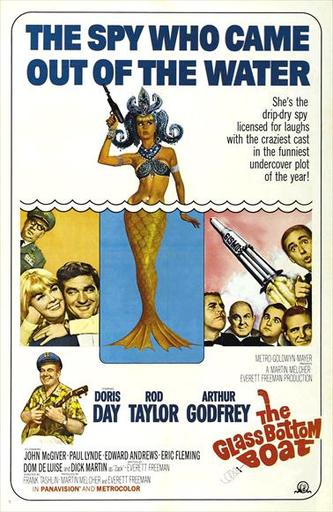 A spoof on spy films, this one has some great slapstick routines and a great cast including: Rod Taylor, Arthur Godfrey, Dom DeLuise and Paul Lynde. It is one of Doris most popular films from the mid 60’s.

Jennifer Nelson (Doris), a young widow working in the public relations office of a space laboratory, meets her new boss Bruce Templeton (Rod Taylor) when he accidentally catches his fishing line on a mermaid outfit she is wearing while entertaining  tourists on her father's glass-bottom boat. Templeton, delighted to discover that the woman he "fished out" of Catalina Bay is working at his plant, assigns her to write a definitive biography of him while he is test-piloting a new  rocket.

Jenny's habit of "exercising" her dog Vladimir by telephoning him at home (he runs around the house whenever the phone rings), arouses the suspicions of CIA men. When she overhears Templeton discussing the possibility that she is
a foreign spy, she makes misleading phone calls at a party at Templeton's home.  Unknown to her, a secret formula has been planted in her purse, and the real espionage agent pays her a visit when she arrives home. Jenny bolts out of a  window and a mad chase follows. The real culprits are apprehended, and Jenny  ends up in her boss's arms.


This fast and wild James Bond spoof is not the usual Doris Day bedroom comedy of the 60s. It's different in that it has a bevy of talented comic actors in supporting roles, who all have their moments to shine. One might think of Lucille Ball in this part, but Doris certainly held her own.

Paul Lynde in  drag is sublime. He looks spectacular in a red bouffant wig and aquamarine satin gown, and is even more glamorous than Doris. They have a "powder room" scene that is hilarious slapstick.

Alice Pearce recreates her Gladys  Kravitz-type character from Bewitched" and is wonderful as usual. It's her last movie role, unfortunately, as she died too young.

A young Dom DeLuise has a funny scene that he does in pantomime, as well as the scene with Doris (ala slapstick) when both have their feet trapped together in a bucket. Dick Martin shows up with some good  reaction takes, and the great character actor Edward Andrews is also in fine blustering form.

For those of us who grew up with or watched the early years of TV, this movie holds something special in the appearances of Arthur Godfrey and Dick Martin, neither of whom appeared in any other film of any major consequence. Godfrey is excellent as Doris' father, and their duet on the title song is fun to watch, as is the short but funny rendering of "Que Sera, Sera". Martin's scenes are priceless. The extensive comedic cast, including the two early TV icons of entertainment, makes this a special film noteworthy for its historical value as well.

Jennifer Nelson: Donna, may I borrow a dime please? I have to call my dog.

"Soft as the Starlight" - Performed by Doris Day

"Whatever Will Be, Will Be (Que Sera, Sera)" - Performed by Doris Day and Arthur Godfrey

"Be My Love" - Performed by Dick Martin


This was one of the most popular of Doris Day’s last 6 films, and is still often seen on TV.  Much has been said about the lack of chemistry between Doris Day and Rod Taylor. That may be true of “Do Not Disturb”, but definitely not true of this film.

"Not only does Robert "Napoleon Solo" Vaughn cameo at the party, but there is a snatch of the 'Man from U.N.C.L.E.' theme heard on the soundtrack when Paul Lynde goes undercover in drag."

"The boat that was used in the film sank two miles off the coast of Zuma Beach in Los Angeles on 11 June 2006. 'The Phoenix' was traveling from Newport Beach to San Francisco Bay where it was going to be used as a Cajun restaurant. The cause of the sinking was due to a two-by-six inch crack in the glass hull. All crew members were rescued. What made the sinking unusual is that the glass bottom is installed at the bottom of a "well" in the center of the ship. The top of this well is set above the usual waterline so that if the glass broke, as here, the ship would not sink. The only reason the ship should sink is if it was heavily loaded, making it sit too deep in the water."

"Alice Pearce and George Tobias appear as a married couple. They were also husband and wife in Bewitched (1964)"

"The set that appears in this film as NASA scientist Rod Taylor's home was later recycled as the bad guys' headquarters in the 'Concrete Overcoat Affair,' a two-part episode of TV's The Man from U.N.C.L.E. (1964)."

"The last picture of Alice Pearce, who passed away on March 3rd, 1966 of ovarian cancer at the age of 48 - just three months before 'The Glass Bottom Boat' had its premiere."

"When Jenny and Bruce are shown riding in a golf-cart type vehicle across the plant, someone calls out a greeting to 'Mr. Taylor' rather than to 'Mr. Templeton', Rod Taylor's actual character."

"When Jenny is outside the plant using a payphone to call her dog she is wearing a different outfit than the one she she is wearing in the scene before and after."