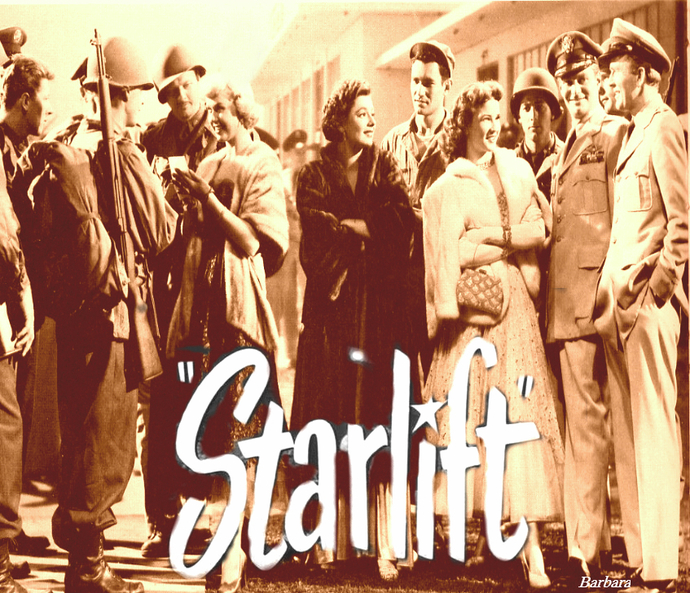 In his 1951 review of the film from the New York Times, Bosley Crowther said that the "acts are unspeakably slapdash and the romance is painful beyond words," and the "performances given by Miss Rule and Ron Hagerthy as the flier are as sappy as they could possibly be, and Dick Wesson as a pushy pal of the flier is downright insufferable."

In its own 1951 review of the film, Time Magazine stated that the film's Operation Starlift "now supplies a backdrop for a spotty variety show, loosely glued together by the romance of a Hollywood star and an Air Force corporal from her home town." 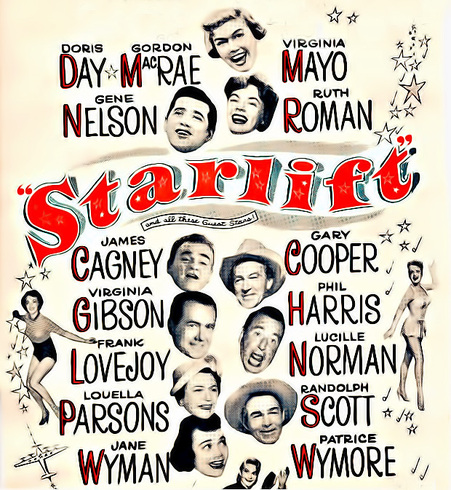 Click to set custom HTML
The only film in which Doris plays herself. James Cagney, Gordon MacRae, Gene Nelson and other stars appear as themselves in this film which details the story of Hollywood stars who perform for G.I.s in transit to and from the Korean War, at Travis Air Base. Doris sings several songs, none of which were ever released.

Starlift was Warner Bros' attempt to revive the "all-star patriotic musical" format which had worked so well during WW II. The wisp of a plot concerns Mike Nolan (Dick Wesson) and Rick Williams (Ron Hagherty), San Francisco-based airmen  who serve as crew members on a shuttle to Korea. To impress a group of movie starlets making a personal appearance, Mike and Rick claim that they're due to be sent into combat. Actress Nell Wayne (Janice Rule) falls in love with Rick, leading to a major publicity blitz and culminating with a special USO presentation for all the Korea-bound servicemen in Frisco, starring virtually everyone on the Warners' contract roster.

The film's highlights are Doris' songs and a duet with Gordon MacRae on "You're Gonna Lose Your Gal".  After an hour, Doris is no longer on the screen, and that is when the film goes bye bye.

Mike Nolan (to cardboard Virginia Mayo): Someday I hope to have the pleasure of knocking you down in person.

"You're Gonna Lose Your Gal" - Doris Day and Gordon MacRae

"What Is This Thing Called Love?" - Lucille Norman and Gordon MacRae

"Liza (All the Clouds'll Roll Away)" - Patrice Wymore

"It's Magic" - Gene Nelson and Janice Rule with vocal quartet

"I May Be Wrong (but I Think You're Wonderful)" - Jane Wyman

Warner Brothers paid Louella Parsons $5,000 to do a cameo role in the film.