An Amazing Historical Record (What a joy to listen!)

Imagine being able to receive a personal CD directed to you and the members of a special club from Doris herself, talking about her daily life and the things around  her. That is exactly what you are about to hear. In the 1950s, British fans formed a world-wide fan club called the Doris Day Society. The fan club grew quickly and fans were treated to well-written, frequent newsletters (on tapes) with photos of Miss Day with news of newly released records, the latest film in production or one already in the movie theater or of her day to day activities. Miss Day received the actual "club" newsletters and participated in them frequently.

She also visited Britain once while filming “The Man Who Knew Too Much.” It was during the trip that Miss Day visited fans at a party in her honor. After Miss Day returned home, she began recording messages to the club in England. There were four tape recordings in total and those were disseminated to fans in the club. 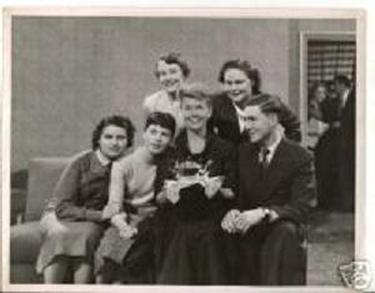 1.  "At the Savoy Hotel"
Interview by John Smitt and fans
With Marty Melcher
Recorded June 19, 1955 - Savoy Hotel; London, England
2.  "At Home with Doris Day"
With Marty Melcher and Alma Day
Recorded Sunday, October 28, 1956 - Burbank, CA
3.  "Just for You"
With Marty Melcher, David Toff
Recorded May 24, 1957 - Burbank, CA
4.  "Daylightfully Yours"
With Shirley Kappel (Doris's sister-in-law )
Recorded December 2, 1957
Palm Drive in Beverly Hills, CA (just prior to move to Crescent Dr.)
Miss Day also continued these newsletters in the 1980's and 90's to her British and Australian fans.  Perhaps if there had been an American fan site, she would have done the same thing at home. Sadly, there never was. That is, until now!

1999 A
1999 B
A very special thank you to all those fans who were able to find and share these tapes which Miss Day recorded and sent to her fans across the pond. They became a special part of their collections, and now they are part of ours as well.