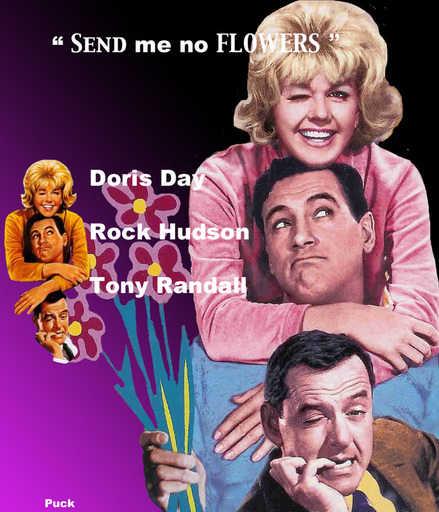 "I didn't feel different in any of them," she says, "even though they were different. I loved being married, and I loved not being married but working on it. And doing what I was supposed to do and be. That's the way I worked." - Doris Day from NPR Doris Day: A Hollywood Legend Reflects On Life April 02, 2012

"She did it all by instinct, and her instinct was dead center, always true." - Tony Randall

"Tony, Rock and I were made for each other and it was hard to tell sometimes where life left off and make believe began." - Doris Day

"First of all, the two people have to truly like each other, as Doris and I did, for that shines through. Then, too, both parties have to be strong personalities - very important to comedy -- so that there's a tug-of-war over who's going to put it over on the other, who's going to get the last word, a fencing match between two adroit opponents of the opposite sex who in the end are going to fall into bed together." - Rock Hudson 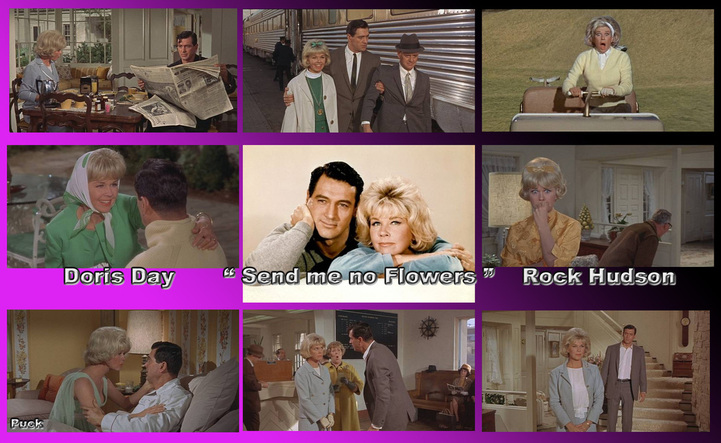 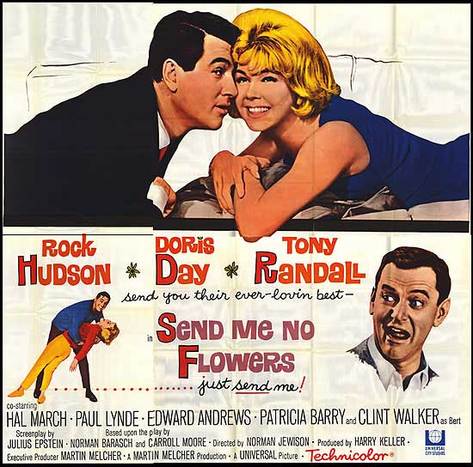 Tony and Rock, back again, for the last time. Not as popular as the other two films with this trio, it was still a big hit, and the title tune was a minor hit, as well.

Light and laugh-filled, Send Me No Flowers is typical Rock Hudson and Doris Day  fare. George (Hudson) is a hypochondriac married to Judy (Day) in this marital  comedy. When George goes to visit the doctor, he overhears two doctors talking  about a diagnosis of a terminally ill patient. George believes they are talking  about him and that he is doomed to die.

He recruits his friend Arnold (Tony Randall) to find a new husband for Judy. Judy thinks George is covering up for  an illicit affair and throws him out of  the house. George locates Judy's old college flame Bert (Clint Walker), now a Texas oil millionaire.

Excellent performances by Edward Andrews as Dr. Morrissey  and Paul Lynde as the aggressive cemetery-plot salesman help this feature along. Although not as solid as the Day/Hudson pairing in Pillow Talk or Lover Come  Back, Send Me No Flowers is still a good romantic comedy.


George Kimball: Egads, you've got cold feet!
Arnold Nash: Complaints, complaints, nothing but complaints! I could do some complaining, too, you know. You ever cut your toenails?

‘SEND ME NO FLOWERS” SONG - This song was originally recorded with Jack Nitzsche. During the same session they recorded "Rainbow's End". This song is written by Burt Bacharach and Hal David and when they were commissioned to write it they were just ecstatic said Burt B. He sent Jack Nitzsche a note﻿ and asked him to make it sound like a "White Ronetts sound". He did and in an interview he said that Doris' husband, Marty Melcher and the top brass at Columbia "went ballistic when they heard it"! It was re-recorded.

Although Rock Hudson was asked to co-star in several other films with Doris, he was asking for too much money, and Doris’ husband/agent (Martin Melcher) would not approve.

Although many people think Doris Day and Rock Hudson co-starred as often as Spencer Tracy and Katharine Hepburn, this was only their third - and final - appearance as a screen team. Tony Randall also appeared with them in all three films: Pillow Talk (1959), Lover Come Back (1961) and this.  It didn’t seem to matter; they still qualify as one of the top screen romantic duos of all time.

In the breakfast scene at the beginning of the picture, the level of coffee in Judy's cup constantly changes between shots. Also, the coffee starts out black, then later has cream in it.

Tollbooth (1994)
Doris and Lillian mention the film and its stars Day and Hudson.

The Directors: The Films of Norman Jewison (1999) (TV Episode)

A Decade Under the Influence (2003)
mentioned in documentary

Mad Men: The Good News (2010) (TV Episode)
The movie is one of the ones that Don and Lane are contemplating seeing.

At the Movies: Episode #10.21 (2013) (TV Episode)
Mentioned by Margaret Pomeranz in a review of the classic movie Pillow Talk as another movie in which Doris Day and Rock Hudson appeared together.

The Beverly Hillbillies: Jed Becomes a Movie Mogul (1964) (TV Episode)
The Clampetts are watching this movie

What a Difference a Day Made: Doris Day Superstar (2009) (TV Movie)
A clip from the movie is shown.