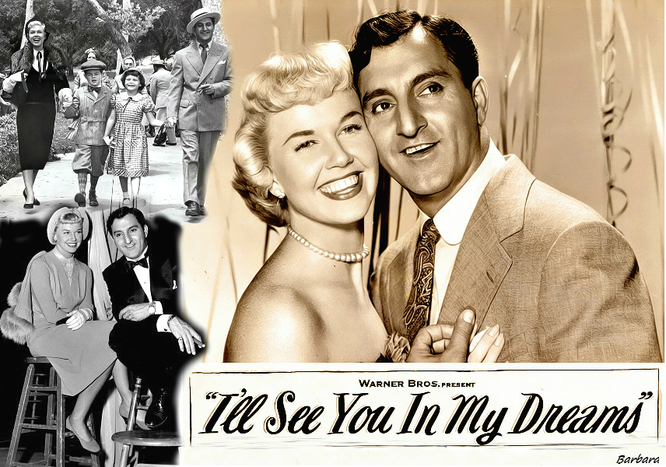 "I'll See You in My Dreams is arguably the best songwriter biopic Hollywood created during the heyday of this genre." - Craig Butler AMG Review

"The best thing I've ever done. And with Doris Day!" - Danny Thomas 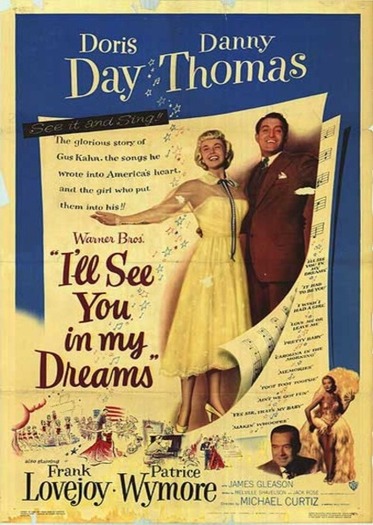 Teamed this time with Danny Thomas, this film tells the story of songwriter, Gus Kahn, and the movie broke many box office records in 1951. The album of standard tunes was the  #1 best selling soundtrack album, and the title song has become a Doris Day favorite.

The film is based on the life and  work of composer Gus Kahn. The story is told from the point of view of Kahn's sympathetic and pushy wife Grace, who was still alive when the film was made (Kahn died some ten years earlier). Danny Thomas stars as the prolific tunesmith, whose fortunes take an upswing in 1908 when he meets and falls in love with Grace LeBoy (Doris Day) who receives top billing, along with some great musical numbers).

Kahn's career ascends to spectacular heights via  such hits as "Pretty Baby", "My Buddy", "Toot Toot Tootsie" and "Making  Whoopee", only to go into eclipse when he loses his savings in the 1929  stock-market crash. Convinced that he's lost his touch and that he's sacrificed true happiness to the evil goddess success, Kahn is ultimately gratified by the love and recognition of his peers. Among the famous personages imitated in I'll See You In My Dreams are Kahn's writing partner Walter Donaldson (Frank Lovejoy)  and producers Sam Harris (Jim Backus) and Flo Ziegfeld (William Forrest).
Movie Quotes

Gus Kahn: You're not going to let a little thing like the fact that we hate each other stand in our way.

Grace Kahn: But if I ever catch you with him again I'm going to scratch your eyes out!

Grace Kahn: What do you want me to do? Sit on the sidelines and watch your talent dry up. I'm your wife Gus. I've got a right to help you.

Grace Kahn: There are some things in a man's heart that don't show up on a cardiogram.

Grace Kahn: Young people don't know how to say I love you. So you say it for them. Put it to 32 bars of music, no more, no less.

"Shine On, Harvest Moon" - Sung by the woman at the Rossiter Publishing Co.

"I Wish I Had a Girl" - Sung by Doris Day and others, Day and Danny Thomas at the surprise party

"The One I Love (Belongs to Somebody Else)" - Doris Day

"Yes Sir! That's My Baby" - Sung during the montage with the kids

"Swingin' Down the Lane" - Sung during the montage with the kids

"No, No, Nora" - Doris Day during the montage after the "Makin' Whoopee" number

"Carioca" - Played during the marionette section of the sheet music montage

"I'll See You in My Dreams" - Sung by a chorus during the opening and closing credits, Doris Day Played at the surprise party

"It Looks Like a Big Night Tonight" - Sung by singers at the Rossiter Publishing Co.

"Bridal Chorus" - Played during the shot of the wedding picture

"Pack Up Your Troubles in Your Old Kit Bag and Smile, Smile, Smile!" - Played immediately after the armistice announcement

"Hello, Baby" - Played when Gus and Gloria are talking backstage

"Ain't We Got Fun" - Played on the phonograph

"Sobre las olas (Over the Waves)" - Played by Johnny, the piano player

"I Never Knew" - Played during the sheet music montage

"I'm Thru With Love" - Played during the sheet music montage

The film broke box office records at Radio City Music Hall in New York City, a holiday hit that still stands among the top grossing films for that venue.