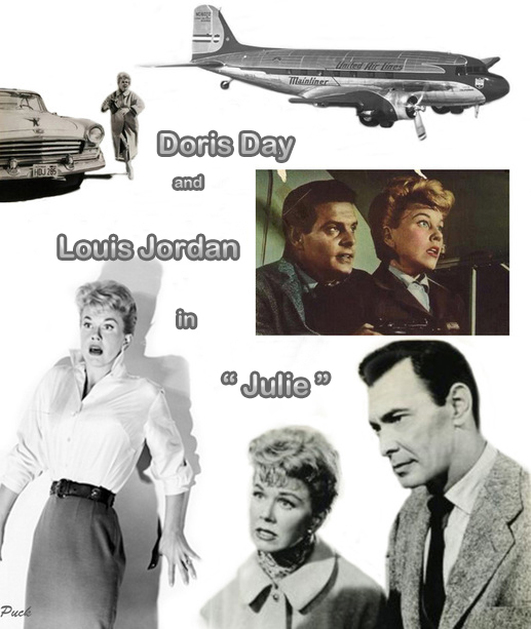 "Ever since my release from Warner Brothers, Marty had been trying to find a property he could produce on his own; Julie was what he turned up with....It wasn't a bad script, but playing the part of a woman victimized by a jealous husband washed back the reality of the insane jealousy of Al Jorden ...and George Weidler's jealousy of my career. I had had more than enough real jealousy to contend with in my life. I didn't want to act in a film in which I played a woman whose husband was so jealous of her he was trying to kill her. That kind of sick film never has appealed to me and I told Marty so." - Doris Day from Doris Day: Her Own Story

"The melodramatics are absurd, none more so than the final sequence in which Doris flies a pilotless airliner to a safe landing... with her eyes shut!" - Jesse Zunser, Cue Magazine

"Almost all of Julie was shot on location in Carmel, which is a lovely resort town a little south of San Francisco. My co-star was Louis Jourdan, whom I liked very much. An amiable man, very gentle, very much interested in the people around him; we had a good rapport and I found talking to him a joy . . . We would take long walks on the beautiful Carmel beach, chatting by the hour." - Doris Day from Doris Day: Her Own Story 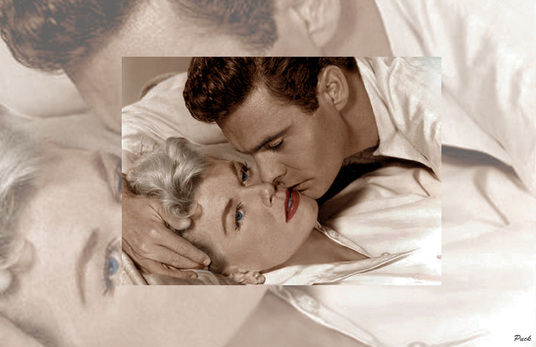 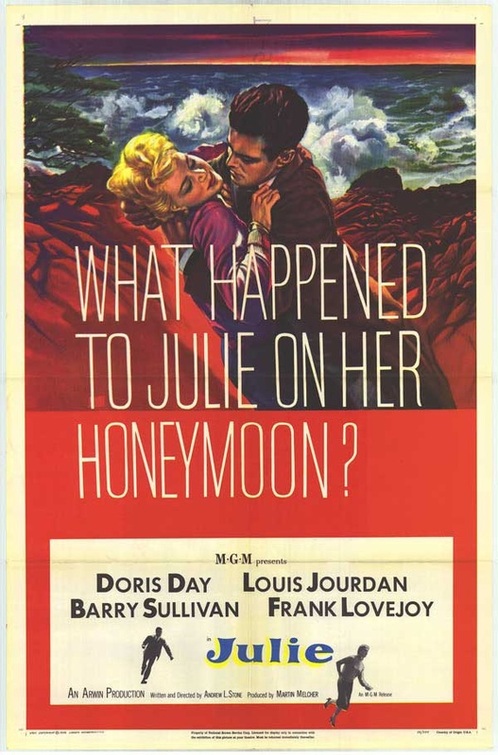 Co-starred with Louis Jordan, Doris spends the film running from a deranged husband (Jordan) trying to kill her. The title song was nominated for an Oscar, beat out by Que Sera, Sera.

Living in Carmel, California, Julie (Doris) and Lyle Benton (Louis Jordan), a flight attendant and a concert pianist respectively, are having problems in their marriage because of Lyle's extreme jealousy. A recent incident of his jealousy resulted in a violent outrage followed by what to her seemed like a heartfelt apology and pleading to her to help him get over this jealous feeling.

This marriage is Julie's second, her first ending when Julie's then husband, Bob, committed suicide. When Bob's cousin, Cliff Henderson, suspects that Bob didn't commit suicide, Julie thinks that Lyle may have murdered him instead. Upon questioning by Julie, Lyle does admit to killing Bob, all in the name of his love for her. With only Cliff to help her, Julie, knowing that Lyle will kill her as well if she ever tries to leave him, has to come up with a plan to get away from Lyle for good.

But even if she can get away, she will have to convince others that Lyle is a murderer, with no direct evidence as such except her word against his. Julie gets away to New York and resumes her career as a stewardess. However, she does have the occasional San Francisco trip. On one such trip Lyle discovers she is there and stalks her again. When Julie is called in unexpectedly to work as stewardess on a flight, she might have gotten her opportunity to get away again.

The plot is further complicated in several ways. On the flight, she discovers her husband on board. When he realizes she is running into the flight compartment to evade him, he follows her in where he kills the pilot, wounds the co-pilot and then is killed himself, leaving Julie the only person to pilot the plane back to safety.

It is also notable as potentially the first film to feature the subplot of a stewardess piloting a plane to safety, later used in Airport 1975 (1975) and parodied in Airplane! (1980). Much of the film is narrated by Doris as Julie.
Movie Quotes

Julie: Is it because he's a cousin of Bob's? Is that it? No because he's a man, any man! And you were annoyed because I stood there and talked to him for 10 minutes. Is that it? Well, if this is what married life is going to be then we have nothing! Absolutely nothing! And I can't bear it anymore Lyle and I won't!

Julie: I'd listen by the hour to Lyle practicing. He played so beautifully. But today there was something strangely disturbing about his music, a sort of savage fury that was almost frightening.

Julie: But it doesn't make any sense because I can't fly a plane!

"Midnight On The Cliffs" - Composed and Performed by Leonard Pennario

The title song "Julie" was nominated for an Academy Award but lost out to "Que Sera Sera".

Some reviewers state that the song “The Twelfth of Never” (made famous by Johnny Mathis) was sung by Doris Day in this film. That is not correct. It is a fact that the song was offered to Doris to be recorded but turned down by her husband/agent.

Julie is notorious for how many time the boom mike or its shadow appear in various scenes.

"While making this film on location, Doris Day repeatedly complained to her husband Martin Melcher, whose first film as a producer this was, that she felt ill and needed a rest. He insisted that she adhere to her Christian Science beliefs - and the film's shooting schedule - and 'have faith' that whatever was ailing her would pass. Once shooting was completed, Day consulted her doctor in Beverly Hills, and discovered a large ovarian tumor, which required her to have a hysterectomy."

"This film is listed among The 100 Most Enjoyably Bad Movies Ever Made in Golden Raspberry Award founder John Wilson's book THE OFFICIAL RAZZIE® MOVIE GUIDE."

"Doris Day did not want to do this film. The character of Lyle Benton was painfully reminiscent of her first two husbands, Al Jorden and George Weidler."

"While on location in Carmel, California for this shoot, Doris fell in love with the region. She retired there and has lived there ever since."