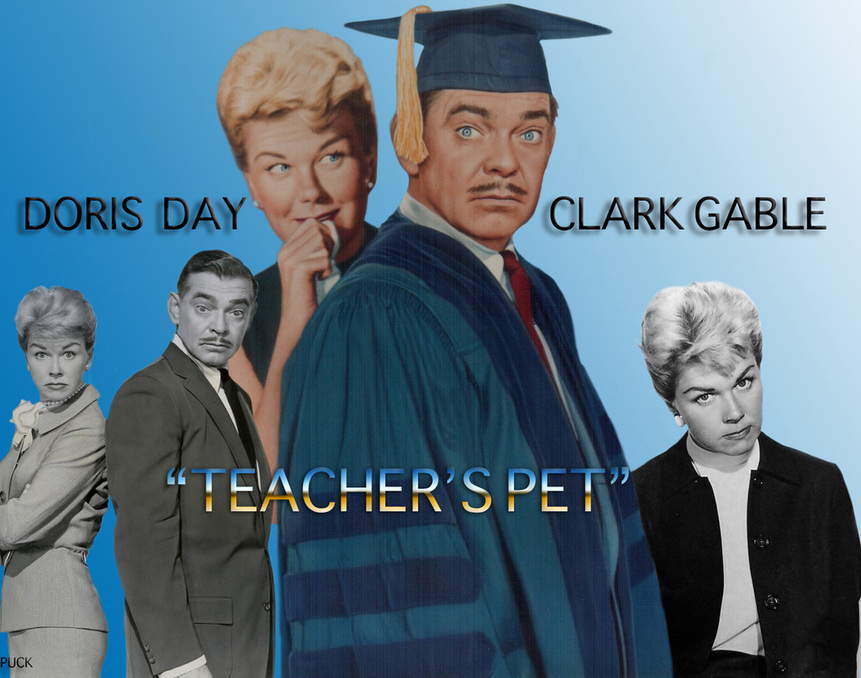 "The idea worked well. Clark and Doris were perfectly matched - she getting laughs with her dotty antics, he for his quirky facial expressions and quick-fire delivery. The film was a smash hit, leaving fans of both stars clamoring for more. Clark (for the first and last time in his career) even agreed to plug it at that year's Oscar's ceremony, broadcast live on television in March. He and Doris had been asked to present the award for Best Scriptwriter. The title-track, written by Roy Webb and Joe Lubin and recorded by Doris, stormed into the American charts." - David Bret from Clark Gable: Tormented Star

"HOLLYWOOD, or that sector of it ruled by George Seaton and William Perlberg, appears to be coming of age. Their 'Teacher's Pet,' which took up residence at the Capitol yesterday, is not in line for a Pulitzer Prize but it is like a kiss or a well-written yarn, a pleasant experience." - New York Times March 20, 1958

"No actor I ever performed with had such public appeal. He was as masculine as any man I've ever known and as much a little boy as a grown man could be--it was this combination that had such a devastating effect on women. But there was nothing of 'the King' about his personality. Just the opposite. Utter simplicity. Uncomplicated. A man who lived on a simple, down-to-earth scale." - Doris Day 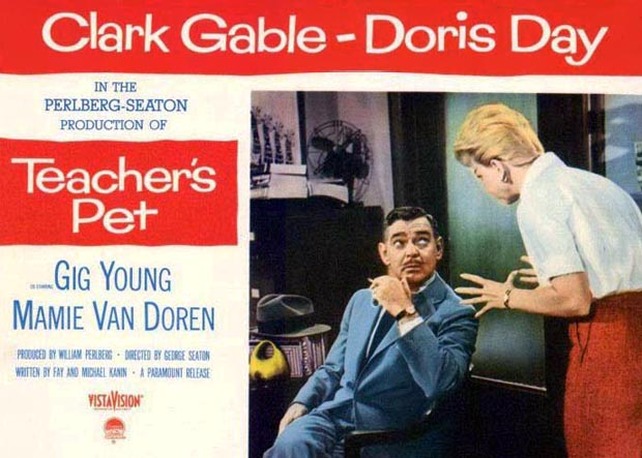 This time Doris co-stars with Hollywood King, Clark Gable, in a great comedy which helped propel her to Queen of the Box Office Status. A very popular film, the title song was a top 40 hit.

James Gannon (Gable), the hard-boiled city editor of the New York Evening Chronicle, has little regard for higher education, having never attended high school himself. When Edna Kovac asks Jim to fire her son Barney, a copy boy at the newspaper, so that he will return to school, the gruff editor refuses, arguing that Barney will receive an education in his newsroom that is superior to what is offered by any university. Later, Lloyd Crowley, the managing editor of the Evening Chronicle , calls Jim into his office, upset that he has rebuffed an invitation to speak before a night journalism course being taught by Erica Stone (Doris).

Learning that Col. J. L. Ballentine, the paper's publisher, is on the board of trustees of the university, Jim reluctantly goes to the school that night to apologize. Before he can tell Erica who he is, however, she reads aloud Jim's insulting letter to her class, in which he refers to such courses as "a waste of time." In rebuttal, Erica tells her class that Jim is one of the "unpressed gentlemen of the press," a relic of bygone era of journalism.

Days later, Jim is still fuming over the experience and taking it out on everyone in his newsroom. He then decides to return to Erica's class, and, in order to show up the instructor, enrolls in the class under the alias "Jim Gallagher." Much to his chagrin, Erica immediately recognizes Jim's writing skills and praises his work to the class. Attracted to the beautiful teacher, Jim decides to continue his ruse after Erica refuses to speak to him when he calls her using his real name. Later, Erica asks him to stay after class, but an amorous Jim is disappointed to learn that it is merely to give him more challenging assignments. Hating the type of "think piece" Erica wants him to write, Jim dispenses his "home work" onto Harold Miller, a college graduate working the night shift at the Evening Chronicle .

Meanwhile, Jim begins his own investigative reporting on Dr. Hugo Pine (Gig Young), a professor of psychology and prolific author who is dating Erica. Disheartened to learn that Hugo is both brilliant and handsome, Jim decides to give up his quest for Erica's affection, though he takes her breath away with a goodbye kiss. By chance, Jim and his date, Peggy Defore (Mamie Van Doren), later run into Erica and Hugo at the Bongo Club, a nightclub where Peggy sings and dances in a scanty costume. Despite Jim's various attempts to show-up the professor, Hugo bests him at every turn, even out-drinking the newspaperman. Offering to help the inebriated Jim get into a taxi, Hugo then makes the mistake of taking a deep breath of fresh air and passes out.

After putting Hugo to bed, Jim and Erica share a cab, and a kiss, on the way to her place. There, Jim learns that Erica is the daughter of the late Joel Barlow Stone, the Pulitzer-Prize winning editor and publisher of The Eureka Bulletin . Suddenly feeling more ashamed than romantic, Jim leaves the apartment without saying a word. The next morning, Jim confesses all to the hung over Hugo, who advises him to tell Erica the truth before she learns it from someone else. Arriving at the newspaper, Jim is called into Ballentine's office, where Erica is waiting to meet with "James Gannon," in hopes she can convince the city editor to hire her student, "Jim Gallagher."  Once she learns who he really is, she chastises him not for the emotional problems he has given her, but for the time she took away from her real students to work with him.

Later, Jim fires Barney, telling him that he does not want to condemn the young lad to a life like his, always excusing himself from rooms when the conversation enters a topic other than newspapers. Back at Hugo's apartment, the professor assures Jim that he is a highly educated man, having acquired his knowledge through experience, not formal education, and even grants the newspaperman an ad hoc degree in liberal arts. Erica then arrives and Hugo convinces her that Jim is a shattered man. Instead, Jim, who does not realize Erica is there, enters the room reborn, telling Hugo he now knows he is a good journalist after reading some copies of The Bulletin , as it is "one of the lousiest papers" he has ever read.

Seeing Erica, Jim apologizes, but tells her that he was simply being honest and challenges her to test her father's paper against the standards of modern journalism. That night, Erica edits her cherished father's work and realizes that Jim is right. The next morning, Jim is once again called into Ballentine's office, where Erica is waiting with the suggestion that she and the city editor co-teach her class. In turn, Ballentine tells Erica that Jim himself had just suggested that the paper do more "think pieces."

As the reunited couple heads off to lunch, Jim is thanked by Edna for helping Barney. In turn, he insists that her son report back to work the Monday after his graduation. While the newsroom watches in amazement as Jim and Erica go off together, someone questions what the two might have in common. Roy, Jim's assistant, responds: "If I know Jim, he'll find something."

Jim (Gallagher) Gannon: How could you give up a real newspaper job for teaching?
Erica Stone: Well, that's a very good question, Mr. Gallagher. Maybe for the same reason that occasionally a musician wants to be a conductor, he wants to hear a hundred people play music the way he hears it.

Erica Stone: As my father used to say, a reporter has to do a lot of sweating before he earns the right to perspire.

Erica Stone: Newspapers can't compete in reporting what happened any more, but they can and should tell the public why it happened.

Jim (Gallagher) Gannon: Good morning, hangover?
Dr. Hugo Pine: Calling what I have a hangover is like referring to the Johnstown flood as a slight drizzle.

"The Girl Who Invented Rock and Roll" - Performed by Mamie Van Doren in the nightclub, sung later by Doris Day in her apartment

"Cary Grant and James Stewart both turned down the role of James Gannon because they knew they were too old for the part."

"The movie was deliberately filmed in black & white in an attempt to disguise Clark Gable's age and weight."

"On January 4, 1937, the film trade magazine Boxoffice announced that according to their national poll, Clark was the most popular film star across the country, followed by Shirley Temple... One of the physical milestones of public esteem for Hollywood stars since 1927 has been to have their foot and/or handprints pressed into the cement paving in the forecourt of Grauman's Chinese Theater on Hollywood Boulevard. On January 20, it was Clark's turn. The largest crowd that had ever assembled for one of these events turned out to watch him do it, a record that stood until Doris Day added her prints in 1961."