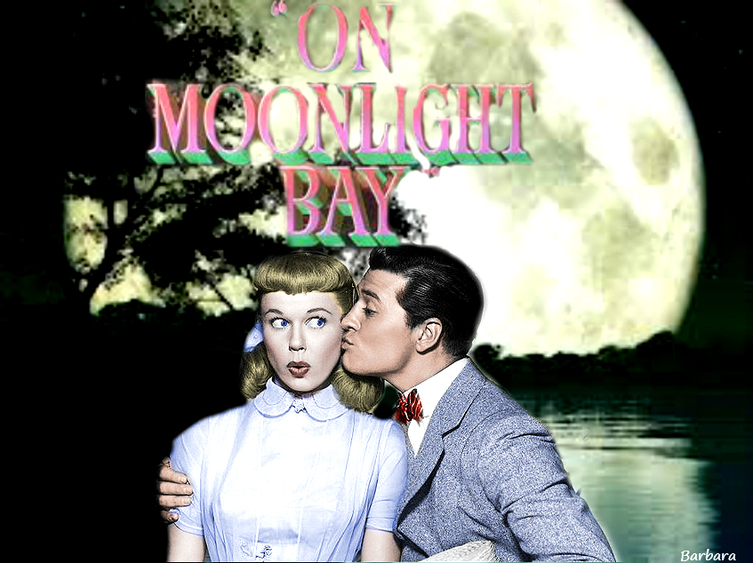 "On Moonlight Bay's script, by Jack and Melville Shavelson, paints an idealized "misty water-colored memory" musical portrait of pre-World War I America. The fact that it depicts an America that never could have existed did not deter moviegoers, and the filmed proved to be a turning point in solidifying Doris Day's star appeal. If On Moonlight Bay showed an idealized America, well then, with the release of this movie, Doris Day seemed to officially seal her status as the idealized girl next door.... In many ways, On Moonlight Bay crystallized the Doris Day film persona that existed for the first half of her feature film career (the second half began with 1959's Pillow Talk): forthright, all-American tomboy exterior and vulnerable feminine interior." - Considering Doris Day By Tom Santopietro

"Silvery Moon and Moonlight Bay—I loved doing those. You know, if life could be like it was in those movies, it would be beautiful, wouldn’t it?" - Doris Day 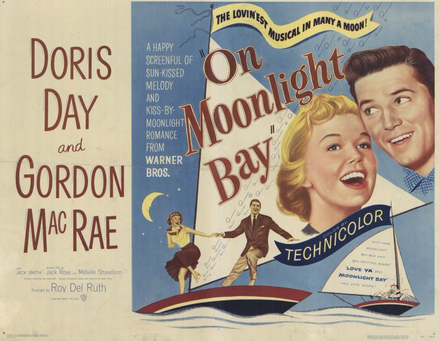 Teamed again with Gordon MacRae, this time we move to the era of World War I in the first of two films that follow the adventures of The Winfield Family and features some great standard songs. The soundtrack reached #2 in album sales.

Booth Tarkington's Alice Adams, coupled with his Penrod stories, were mostly incorporated in the script of this Warner Bros. musical. The role of the incorrigible Penrod (Wesley) is played by future Father Knows Best regular Billy Gray, but his is a strictly secondary part herein.

The emphasis is on Wesley's older sister, played by Doris Day. She falls in love with Gordon MacRae, whose mildly anti-capitalist sentiments sit not at all well with Doris' banker dad (Leon Ames). Once a subplot involving Penrod's prevarications concerning his father's "supposed" drinking habits is out of the way, movie goers are treated to several romantic scenes involving  Doris and Gordon, and a steady stream of early-20th-century standards like "Till We Meet Again," "I'm Forever Blowing Bubbles," "Cuddle Up a Little Closer," and  the title song.

On Moonlight Bay ends with MacRae marching off to World War I and Doris promising she'll wait for him; she did, as was proven in the 1953 sequel By the Light of the Silvery Moon.


Aunt Martha Robertson: No man believes in marriage... until a woman traps him into it!


Mr. Winfield: Marjorie's young and very inexperienced. All she knows about men is their batting averages.
Stella: In case you're interested, this one's batting a thousand.

"Pack Up Your Troubles in Your Old Kit Bag and Smile, Smile, Smile!" - Gordon MacRae and the Soldiers

"Cuddle Up a Little Closer, Lovey Mine" - Gordon MacRae and Billy Gray

"Hark! The Herald Angels Sing" -  Billy Gray and the Carolers

"Merry Christmas All" - Doris Day and the Carolers

"Every Little Movement (Has a Meaning All Its Own)" - Jack Smith

"Till We Meet Again" - Doris Day and Gordon MacRae

"Oh, You Beautiful Doll" - Played during the carnival game
Also played in the bar during the silent picture

"Hurry No. 1" - Played during the silent picture after John returns home

"It's a Long, Long Way to Tipperary" - Played by the band at the railway station

"This movie proved to be so popular that the studio immediately filmed By the Light of the Silvery Moon which is a direct sequel with all the actors playing the same characters. This was very unusual at the time." - IMDB (Internet Movie Database)