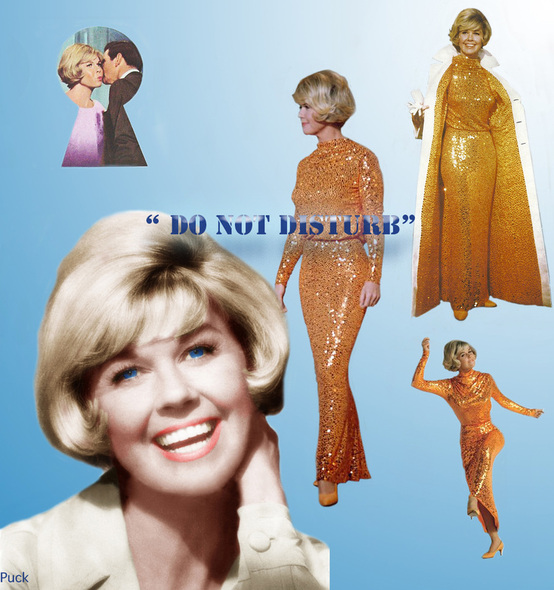 "I'll tell you this much about Doris Day: I love that girl! She's one of the greatest pros I've ever worked with. I've been going to the rushes every day on this picture [Do Not Disturb], which is something I never did before; all I can say is that I haven't recognised myself because of her. I can't put my finger on it, but whatever it is, Doris brings out great things in a man. We play a happily married couple who fight like mad but make up like crazy. ... The studio seems to think we have a sort of -- chemistry? Anyway, they've thought enough of us to team us in another picture ... called 'The Glass Bottom Boat'." - Rod Taylor Modern Screen, July 1965

"There is a marvelous chemistry between Doris and Rod. They work together so beautifully. There is no ego involved when they're filming a scene. Their only interest is making the scene play to maximum benefit." - Ralph Levy 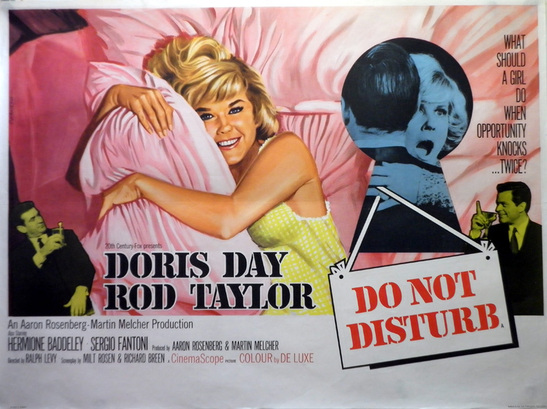 This is the first of two films (supposedly set in London) which costar Doris with Rod Taylor (the follow-up, "Glass Bottom Boat", is a much better film to showcase this new romantic team).

Janet and Mike Harper (Doris and Rod Taylor)  rent a house in the English countryside from Vanessa  Courtwright after Mike, an American wool company executive, moves his office to London to stimulate foreign trade. Mike spends his time in downtown London keeping company with his assistant, Claire Hackett, and attending  parties  thrown by his boss, Mr. Langsdorf, parties to which wives were not invited.  Meanwhile, neglected Janet is at home , with a bevy of animals and interior decorators.

Paul Bellari (Sergio Fantoni), a handsome antique dealer encourages her to fly to Paris with her  to inspect an antique table she wants to purchase as a surprise for her husband.

While there, they visit a bistro where Janet becomes a one woman show and then passes out from drinking too much wine.  Paul takes her back to his office, and they accidentally get locked in for the night. Mike hears of the trip and takes the next flight to Paris. When he finds them in the office, he  fights with Paul clocking him and leaves in a huff. Janet desperately wants to explain what happened to him but can't find him. So, she plans to surprise him at one of his boss' parties, and she shows up in a gold, form-fitting lame' dress. (She's gorgeous, and every male is after her, especially the boss!)

After some misunderstandings and plot complications, Mike and Janet reunite and all ends happily.  On his behalf, Taylor does not have enough screen time in this film to really show how much screen chemistry there is between the two stars.  He makes up for that in the next film to come.

Vanessa: You're not going to have a lawyer. We're going to find you a lover.
Janet: What would I do with a lover?

﻿Paul: There are no hours for champagne. Nor is there a limit.﻿
﻿
Paul: In Paris no one ever has enough champagne. Do you know why? Champagne is the drink of romance. And romance is the soul of Paris.﻿

"Although this film is set in Europe, the entire production was filmed on the 20th Century Fox back lot in Los Angeles."

"There is a neat in-joke in the film. When the French children find out that the character played by Doris Day is American, they ask her whether she knows Rock Hudson or Cary Grant - who had both been recent co-stars of the real Doris Day. Hudson costarred in Pillow Talk (1959), Lover Come Back (1961) and Send Me No Flowers (1964). Grant costarred in That Touch of Mink (1962)."

"Opening in the US just before the winter holidays, a portion of the film's ad campaign featured Doris Day under a decorated tree, surrounded by presents, holding up a gift-wrapped package with the caption 'Do Not Disturb... Until Christmas.'"

"Doris Day wrote in her 1975 autobiography that this was one of the films that she did not want to do but was forced to do because her husband/manager Martin Melcher had power of attorney and signed her for it without her knowledge or consent."

What a Difference a Day Made: Doris Day Superstar (2009) (TV Movie)
A clip from the movie is shown.