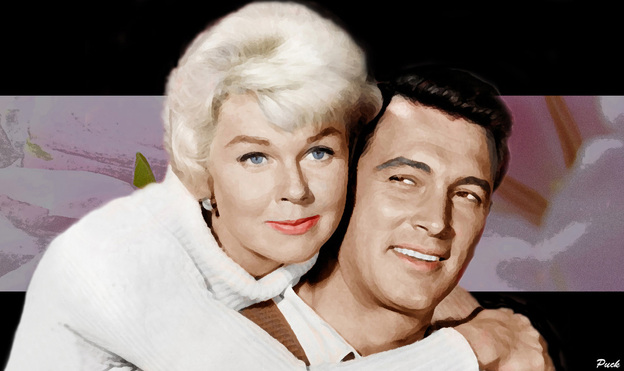 "Shooting Pillow Talk was like going to a party. It was a day's work of fun; it wasn't work at all." - Rock Hudson

"She is gorgeous. She is stunning. She is something special and the audience doesn't know about it yet." - Ross Hunter

"I was a businesswoman. I don't think I was a virgin. I went off to the country with him and I probably would have succumbed, except that I found out he was a phony and ran away. The audience - you thought I was a virgin. You thought when I went off with him, oh, she'll think of some way to wiggle out." - Doris Day from Rock Hudson: His Story

"Pillow Talk is a sleekly sophisticated production that deals chiefly with s-e-x. The principals seem to spend considerable time in bed or talking about what goes on bed, but the beds they occupy are always occupied singly. There's more talk than action natch." - Variety 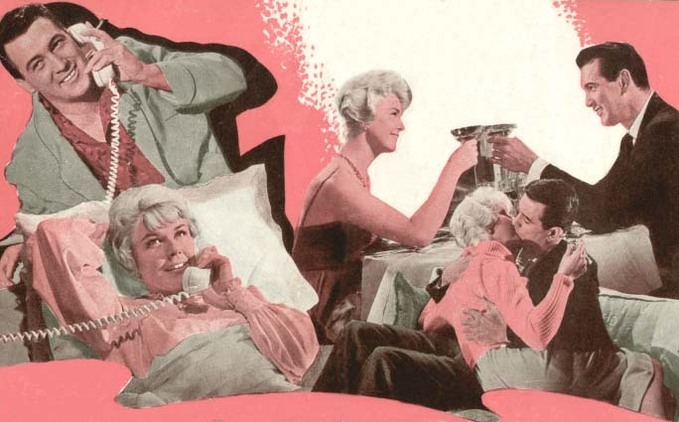 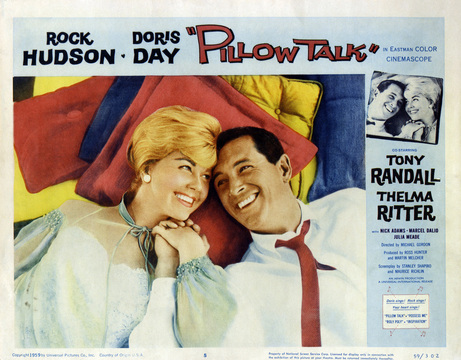 This one took Doris right to the top and kept her there. Co-Starring Rock Hudson and Tony Randall, everything worked, and Doris got her first Oscar nomination.  A smart comedy even by today’s standards, the only thing missing was some better songs. The title tune was popular.

The fabulously successful Pillow Talk was essentially the model for romantic comedies of the late 50's and early 60's, and Day and Hudson became the most popular romantic duo on the big screen. Today, they are still recognized that way.

The story involves Playboy composer Brad Allen (Rock Hudson) and interior-decorator Jan Morrow (Doris  Day) who are obliged to share a telephone party line. Naturally, their calls overlap at the least opportune times, and just as naturally, this leads to Hudson and Day despising each other without ever having met in person.

In a cute but convenient coincidence, Doris' boy friend is Jonathan Forbes (Tony Randall), who also happens to be Hudson's best pal. Once Hudson gets a glimpse of Day, it's lust/love at first sight. To avoid revealing that he's her telephone rival, Hudson poses as Rex, a wealthy Texan who turns the charm on Day. It works until she agrees to go away with him for a long weekend. While Rock is out getting firewood, Doris straightens his coat, and out drops a song sheet. As she plays the notes on a piano, she instantly recognizes the tune that she has heard hundreds of times crooned over the phone by Brad to his stable of girlfriends. When he returns, she confronts him, he apologizes, trying to telling her he has fallen in love with her, she starts packing...wants nothing more to do with him. At that convenient moment, Jonathan (Tony) shows up just in time to take Doris as far away from Hudson as possible.

Problem: both have fallen in love. Rock wants her back; she hates him and will not see him. In a funny scene between Rock and Doris' maid (played by Thelma Ritter), she tells him the way to get her back: "she's a decorator. You have an apartment to be decorated."  Doris accepts the job only if given carte blanche.


She gets even by  decorating Hudson's apartment in an unbelievably  hideous manner. But Hudson loves her all the same; he "kidnaps" her, carrying her through the streets in her nightgown in full view of everyone, including a laughing cop who refuses to intervene. When they arrive at the newly-decorated apartment, he tells her she can have it...that he was planning to propose to her once she had finished. As can be guessed, they make amends and end up together.

Pillow Talk is still one of the best of the frothy Doris Day-Rock Hudson vehicles; it made a fortune at the box office and garnered five Oscar nominations, and was one of the Big Ten Films for 1959. It took both Rock and Doris to the top of all the movie star polls of that year, and they became one of the most remembered screen romantic couples.

Jan: Officer, arrest this man - he's taking me up to his apartment!
Police Officer: Well, I can't say that I blame him, miss.

Alma: Six foot six inches of opportunity doesn't come by every day. When you see it, grab it.

Alma: If there's anything worse than a woman living alone, it's a woman saying she likes it.

"I Need No Atmosphere" - Performed by Perry Blackwell

"You Lied" - Performed by Perry Blackwell

"Possess Me" - Performed by Doris Day

"Rock Hudson turned down the film three times, believing the script to be 'too risqué'".

"Ross Hunter wrote that after he made this film, no theater managers wanted to book it. Popular movie themes at the time were war films, westerns, or spectacles. Hunter was told by the big movie chains that sophisticated comedies like "Pillow Talk" went out with William Powell. They also believed Doris Day and Rock Hudson were things of the past and had been overtaken by newer stars. Hunter persuaded Sol Schwartz, who owned the Palace Theatre in New York, to book the film for a two-week run, and it was a smash hit. The public had been starved for romantic comedy, and theatre owners who had previously turned down Ross Hunter now had to deal with him on HIS terms."

"Michael Gordon had hoped to make a sequel to this film in 1980. It was to star Kristy McNichol as Jan and Brad Allen's daughter and Gregory Harrison as her boyfriend. Unfortunately, Gordon was unable to lure Doris Day out of retirement to make the film."


"Jonathan drives Jan back to New York in a black car with a hard-top, but when they arrive at the diner it is black with a white vinyl roof."

"When Jan and Jonathon are talking in front of the interior design store about the car he is offering her, the same extras are seen multiple times. A woman with a blue coat and gray hat walks by four times, and a woman with a red coat walks by at least three times."

Saturday Night and Sunday Morning (1960)
Poster at cinema on Arthur and Doreen's date.

Tattoo, a Love Story (2002)
Virgil has a late fee at the video store for this movie

A Decade Under the Influence (2003)
mentioned in documentary

A Legacy of Filmmakers: The Early Years of American Zoetrope (2004) (Video)
mentioned once

Maltin on Movies: Due Date (2010) (TV Episode)
Movie referenced in this episode.

"In the diner scene near the end, the restaurant patrons were supposed to deck the Tony Randall character, who would fake the blow and slide down 'unconscious' in the booth seat. However, during filming the actor overestimated his hook and knocked Randall out for real. The shot wound up being so good that the actual take shown in the film was the one of this accidental punch."