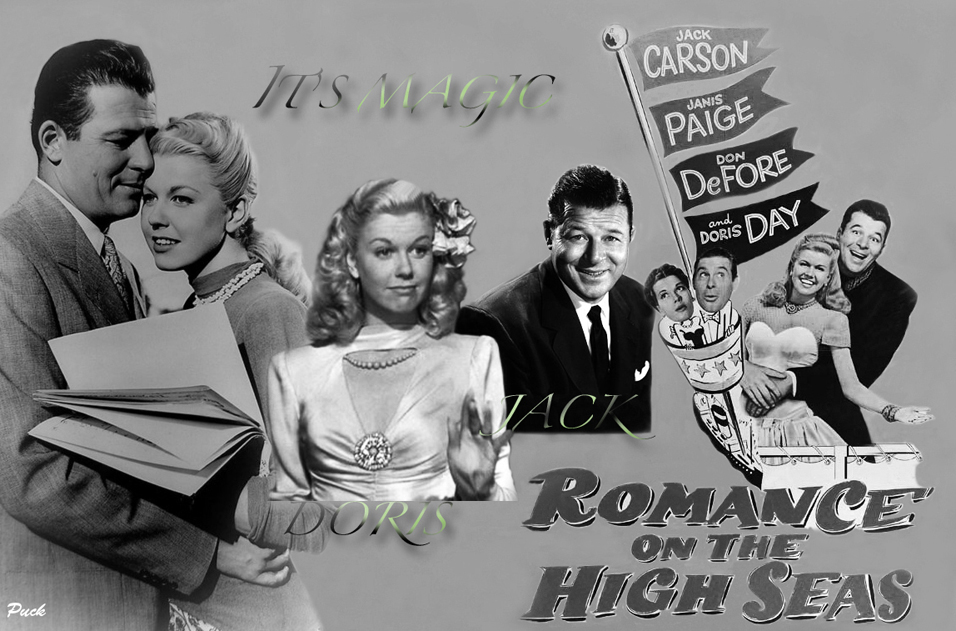 "I'll remember this to my grave. We all walked into a room to see the screen tests. The first screen test was Marion Hutton's. Then came Janis Paige (who ended up with a part in the film). Then on the screen came Doris Day. I can only tell you, the screen just exploded. There was absolutely no question. A great star was born and the rest is history." - Sammy Cahn 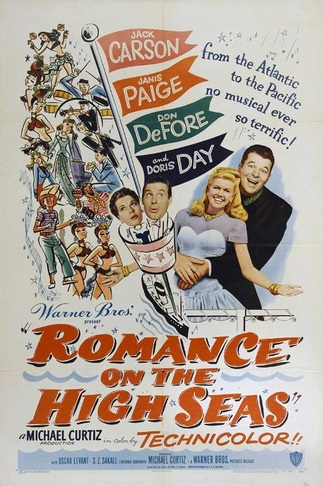 Starring
Jack Carson
Janis Paige
Don DeFore
Doris Day
Oscar Levant
S. Z. Sakall
Fortunio Bonanova
Eric Blore
Franklin Pangborn
Leslie Brooks
William Bakewell
John Berkes
Avon Long
Page Cavanaugh
Page Cavanaugh Trio
Sir Lancelot
Samba Kings
Music by
Ray Heindorf
Oscar Levant
Cinematography
Elwood Bredell
Editing by
Rudi Fehr
Distributed by
Warner Bros.
Release date(s)
June 25, 1948
Running time
99 minutes
Box-Office Gross (USA)
$4,200,000.00
"Michael and Elvira Kent love each other, but each jealously suspects the other of being unfaithful. On their third anniversary, Elvira visits a travel agent to plan a cruise to Rio and, while there, meets Georgia Garrett, an impoverished singer who amuses herself by planning trips that she can never afford to take. When Mike suddenly cancels the trip for business reasons, Elvira suspects that he is really staying in town because of his attractive new secretary, Miss Medwick. Lazlo Lazlo, Elvira's uncle and the owner of the pharmaceutical company that employs Mike, suggests that Elivra travel to Rio alone. Elvira then decides that she will pretend to leave town, sending Georgia in her place, and that way catch Mike in an infidelity. After Elvira plots the deception with Georgia, however, Mike announces that he will be finished with his business earlier than planned and will be able to join her in Rio. When Elvira nervously objects, Mike becomes convinced that she is having an affair and hires private detective Peter Virgil to follow her aboard the ship. The first night out, Peter and Georgia, who is posing as Elvira, meet and, from then on, spend all their time together. Peter reports to Mike that "Elvira" is definitely traveling alone, and to her dismay, Elvira discovers nothing untoward about Mike. Meanwhile, Georgia is almost exposed when Oscar Farrar, her pianist boyfriend, unexpectedly arrives on the ship. When she sees him, Georgia claims to be sick, and stays in her room. Despite her efforts, Oscar discovers her new identity and visits her cabin. Peter spots them through the porthole and thinks that he has finally discovered Elvira's lover. Later, Georgia tells Oscar that she has fallen in love with another man. In Rio, Peter, still thinking that Georgia is Elvira, tells Mike that he has fallen in love with his wife. Mike immediately flies to Rio, and Lazlo advises Elvira to do the same. After much confusion, Georgia is hired for a high salary as a singer at a Rio hotel, and Pete learns her real identity. The couple are happily reunited, as are Mike and Elvira." - TCM

"Put 'em in a Box, Tie 'em with a Ribbon and Throw 'em in the Deep Blue Sea" – Doris Day and the Page Cavanaugh Trio
"It's Magic" – Doris Day
"It's You or No One" – Doris Day
"I'm in Love" – Doris Day
"The Tourist Trade" – Avon Long
"Run, Run, Run" – Jack Carson
"She's a Latin from Manhattan" – Doris Day
"Romance on the High Seas" – The Samba Kings
"Brazilian Rhapsody" (aka Cuban Rhapsody) – Oscar Levant

"Planned to star Judy Garland, but Betty Hutton was cast instead. Hutton became pregnant, so Doris Day was given the role." - Turner Classic Movies

"Released in UK as "It's Magic", after the success of the song." - Turner Classic Movies